2:08 Jake Platt talks about the culture he tries to foster at his two affiliates in Washington state. He explains how he keeps track of 500 members every month and discusses how and why he does his programming a month at a time. Jake also talks about why he places a lot of emphasis on strength-biased programming and where he will be taking his affiliates in the future.

29:39 Rob Orlando is a successful competitor in strongman competitions and the owner of Hybrid Athletics. He finished 22nd at the 2009 CrossFit Games. Rob discusses the philosophy behind creating his affiliate and how he’s continually striving to produce athletes who are incredibly strong CrossFitters. He explained why he likes to include strongman movements in the WODs and how his training and diet have changed and affected his performance since finding CrossFit. The strongman based in Connecticut also talks about the video 100 Body Weight Squats, in which he squats 200 lb. 100 times in a row. 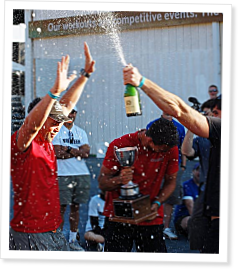 00:26 With a little more than a week to go until the CrossFit Games, Justin began the show by reading… Continue Reading

Same things as a podcast in Itunes. It asks for a login and password.

Sorry gents. Had the wrong box checked. Should be good now.

Still can't get iTunes to find it... on PC or on iPhone.

Hello, I am very new to crossfit and your show. I drive a truck at night and listen to atleast 6 shows a night. I started at the very first one and listening to them in order. Do to my time constraints I started working out at my house. I'm slowly getting equipment I need to do crossfit. This show was great cause I was overwhelmed with information from the site. Now I feel I have a game plan to fitness. I have started driving over a hour one way to help with my lifts once a week. I also started doing a paleo zone diet. I do feel better and some of my aches have left. Which at 40 is a blessing since I could hardly move at the end of my 14 hour shift. Now I go home and start working out. Thank-you for your show I know it's 3.5 yrs old but. ...