The initiation of Operation Phoenix in March 2008 marked the end of the legendary CrossFit HQ, Greg and Lauren Glassman’s gym in Santa Cruz. With all the gear donated to the Marines and the lease up, it seemed as though the writing was on the wall.

And what was going to happen to the culture of CrossFit now that the founders had moved?

What happened was an explosion of growth. What may have looked like a curse—the loss of the chief—quickly turned into a blessing. Three Santa Cruz gyms immediately rose from the ashes of HQ, all located within 10 miles of each other. The question remained: could all of them survive?

Skip forward to September 2009, and we now have five affiliates in Santa Cruz, each with its own base of clients and trainers, and two within 800m of each other. What started as a small gym in Santa Cruz has turned into a large, vibrant community of athletes. The original HQ was a modest 1,200 square-foot facility in a small research park. CrossFit Santa Cruz now resides in a 3,500 square-foot facility, and the four other gyms make even more real estate available for CrossFit.

Getting all the gyms together at CrossFit Santa Cruz Central on Sept. 12, 2009 was an exciting and inspiring event. The members of each affiliate seemed to be quick friends and were often cheering for their competition. It was a lot like the athletes’ warm-up area at the 2009 Games. Competitors were socializing and assisting each other during the breaks. Coaches were assisting rival athletes before a competition. At the end of the event, everyone couldn't stop talking about the next one.

CrossFit in Santa Cruz is alive and well. 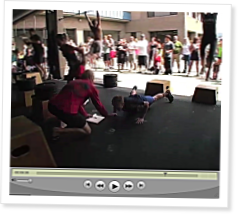 After being coached through a WOD by Hackenbruck, Miranda… Continue Reading

The Army-Navy football rivalry is world famous. Just as fierce, though, is the Army-Air Force rivalry. On Nov. 7, 2009, the two football teams competed in Colorado Springs, Colo., and… Continue Reading

Beast of the East

By Tony Budding and Rory McKernan

Welcome to the Beast of the East Throwdown hosted by CrossFit New England in November 2010. CFNE owner Ben Bergeron says the event was a huge success.

The Southwest Airlines Ding program is a great way to make new CrossFit friends. For only $346 combined, Tony Budding and Rory McKernan of the CrossFit Media crew spent a day… Continue Reading

Thanks so much for this video! The idea of fun and community support is what drew me to CrossFit in the first place.

Santa Cruz is the bomb!! You guys changed my life, I miss you!

"Extra special today is our CrossFit Santa Cruz Central Masters 60 plus team. If you guys want the essence and the inspiration of CrossFit I really encourage you to watch these four people today because that is what it is all about."

What a great quote! It is hard to pick my favorite thing about CrossFit but one of the top 3 would be the ability to bring a community of diverse people together and have them workout side by side. I love that CrossFit has created a community where the price to join the "inner circle / cool group" is to show up when you say you are going to show up and do your very best. This is what a gym should look like.

It was amazing to watch the Masters division!! They are a true inspiration and I can't wait to show my parents this video.