You train harder than anyone else but you still get beat. What gives?

Zach Even-Esh of Underground Strength Coach/CrossFit Underground had that exact experience, and after injuries and a lack of success, he discovered a kind of training that took him beyond the traditional bodybuilding movements so many people rely on to get “fit.” Even-Esh also had a lot of work to do mentally to pull himself out of depression and self-doubt.

After researching more effective training methods, Even-Esh discovered functional training involving sprinting, gymnastics movements and powerlifting principles perfected by people such as Louie Simmons at West Side Barbell. CrossFit was just the logical next step in the process.

Now, Even-Esh has dedicated himself to using his knowledge to help other athletes avoid the mistakes he made back in the day. 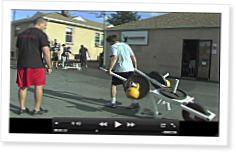 Zach Even-Esh, owner of the affiliate Underground Strength Gym, has found success training young athletes. He takes all athletes, from the best to the strugglers, and helps them reach their goals.

Zach Even-Esh of Underground Strength Coach/CrossFit Underground believes his gym is a lot like Fight Club.

“This is basically like an underground tribe,” he says. “You’ve got kids that walk around the… Continue Reading

“We want the kid that is so driven to just become his best, and we help shape him,” says Zach Even-Esh, owner of the affiliate Underground Strength Gym. He takes prospective athletes on an… Continue Reading

16 Comments on “Part 1—From Humble Beginnings”

I am honored that Again Faster & CF even wanted to film or see the slightest ounce of what I do.

I admit, listening to myself got my a lil' choked up, b/c it makes me think of my teenage years and brings me back to some dark times.

I REALLY am honored to have been filmed and I hope just 1 person is helped from this video.

Thank YOU for anyone and everyone helped make this possible.

I'll come back and answer any individual questions should anyone have any.

Can't wait to watch this at home!

Awesome Zac. Very inspirational. Mate I see your name everywhere...do you ever sleep!?! I think I share a similar path, trained hard at school, poor technique poor mindset accumulation of injuries = lack of results! I'm about to open my own fitness business now with one of my main goals being to help kids/adults whoever avoid the poor technique that I employed so they can take it to the next level. Thanks for stepping up and showing the way.
DH

Big things from here on out man. That's what drive, desire, determination, dedication and discipline get you. When those things pay off it shows you can do pretty well WITHOUT getting your head kicked in :)

Hey maybe you could share with us, who saw your vid a couple months back, "the hustle" to succeed and what it takes.

Hey Zach,
Great Stuff, I am a young affiliate owner out here in Brockton, Ma.. and had similiar experiences through basketball... We have been training out of my 200 sq foot garage, but just moved into a 2000 sq foot place... As like you, I find the tires, tire pulls, sandbag usage and overall functional and odd object training is ideal.. I am currently training a few high school wrestlers... and every Sunday, we have sport specific training where we implement shoots or stand ups in to the workout... I see it as, if my high school athletes can get 10,000 shoots, take downs, stand-ups, whatever it is.. before season they will be generally quickers and more effiecient...

Z--
Great to see this in the CF Journal! Over the past few years I've followed many of your areas of research and have always been impressed with how hard you dig to find the best training available.
I remember you mentioning the training in hard-core gyms in Israel several years ago; many people would never have searched that out.
That caught my attention, big time!
I got your Underground Strength Manual a few years ago & it was excellent!
But you didn;t stop there, you went on to put out the Russian Lion Strength Course, and more.
I also noticed you were one of the few gym owners to incorporate Battling Ropes into your training (we use them here every training day).
All that & still keep family time a priority.
Keep up the great work!

Zach, pleasure to see your star rising--by your own accord, not anyone else's.

Had the pleasure of working in your circle with Jason C Brown and Pamela Macaltree via CrossFit Philly back in the day... Good to see and hear you from afar.

Wow, like almost everybody above me and I'm sure a lot of people reading, I too had almost the exact same experience in my highschool and college sports career. Great stuff, very inspirational.

Wow. This is really excellent.
I can't wait for further installments!

I've been going through the same thing lately as an aspiring collegiate athlete and this is really motivating.

Thanks for the good work.

Reminds me of this quote from Rip.

"Mediocre athletes that tried like hell to get good are the best coaches".

Guys, thnx for the great words.

RE: The Hustle.... I never wait for clients or anything of that matter to find me, or find their way accidentally to me.

I get out and work with surrounding teams, often times for free, developing relations with coaches and athletes.

I stay active in being in front of my own athletes - attending their games / matches.

If I just stayed hidden away in that little garage, noone would know about what is happening.

Like I said in my video, I want to help kids avoid what I went through. So even if I can not help all kids, maybe getting in front of them a few times will change the "game" for them at least somewhat!

Z--
What's the chances of learning more about the underground Israeli gyms you mentioned in some of your earlier works?
I have had an ongoing interest in Israeli training methods for quite a while.
Any in formation or resources you can provide would be greatly appreciated!

First off I am a big fan of your attitude, both in training and business. What you are doing now brings back memories for me in the early 70's when I was training with a broom stick with the broom portion cut off and gallon milk jugs filled with water or sand for weights stuck on each end, talk about stability training huh? Hardcore and Underground is the only way.....it shows the desire and the discipline to train. I too trained incorrectly for many years...thank goodness for the ability to share wisdon through this journal. Keep up the good work and all the best in your business ventures.

Great work, Zac. I've also heard you twice on CrossFit Radio, & I always get a lot out of what you share. Keep up the great work!

Great video Zac. Was good to meet you last year at Trident CrossFit and could tell your passion for coaching. Hope it continues to go well.