Fortunately, assholes are somewhat rare in the CrossFit world—but why, and how do you deal with the occasional jerk? Affiliate owners and academics offer answers and strategies.

After finishing the WOD, the guy looked over at one of his fellow members at CrossFit Virginia Beach and said, “Is that all you’re going to lift?”

For owner Thomi Gill, that was the last straw. Less than a month earlier, this particular member had shown up at CrossFit VB. Soon, Gill noticed that other athletes seemed to tense up when he walked in the door. And when she tried to coach him, he wouldn’t listen. After he made that snide remark about another athlete’s performance, Gill decided it was time for him to go. If he didn’t get the message, Gill was ready to play her trump card: the “asshole clause.”

CrossFit Inc.doesn’t have an official no-assholes policy. What’s taken shape is more powerful than any written directive: a culture that, as Coach Greg Glassman put it in the CrossFit Journal video Primal Fitness (Aug. 25, 2009), naturally “co-select(s) for a bunch of admirable character traits.” 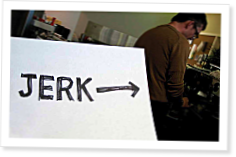 During this CrossFit Powerlifting seminar at … Continue Reading

The Point of Explosion

CrossFit Games Behind the Scenes: Saturday and Sunday

At the 2011 Summer Affiliate Gathering in Big Sky, Mont., Olympic-lifting expert Mike Burgener shares his coaching insight into the set-up and take-off positions.

In this installment of the Behind the Scenes series, Sevan Matossian takes his camera off the competition floor to talk to CrossFit staff, judges, volunteers and competitors on the… Continue Reading

21 Comments on “The Asshole Barrier”

Love the idea of an asshole clause. It's so true how a negative attitude can influence the whole atmosphere. I remember the days I started out going to a big box gym. There was an asshole that intimated me. Fortunately, I had some "big" friends who encouraged me and I very shortly out did the asshole.

Now, I wish my workplace had an asshole clause.

This was just what I needed to read today after a bad day at work. It lifted my spirit. I love CrossFit!

sometimes assholes are necessary; by confronting them, they remember us our values.
as a CF box owner, I tolerate them some weeks. If they do not change their attitudes (ie, lying), the will be fire directly by me or by the others clients.

I am adding that clause to our waiver. In 7 years we have had to throw out 5 - so it isn't really that bad. Still it would be a chance to lay it our before it becomes a problem.

I think this may be another domain...doing a WOD/task with an asshole next to you. Dave Castro should think about that for the 2010 games. You could have an asshole talking crap to the members as they do Fran.

I love the NA clause. Nice to see an article on the topic. I'm also thinking of a "Brush your teeth/wash your gym clothes/be bold and experiment with deoderant" clause for a few select clients. Stink AFTER the WOD, not when you walk in the door.

Good call on the stink clause! I would also add for a few of the guys I train with a "please fart outside the box" clause.

Hey - Crossfit is about dealing with the real world unknown and unknowable, that means being able to work out next to the stinky person or behind someone who just crop dusted, builds character! I'm with Patrick, at the Games we should have "asshole near by" workouts, "caught in a fart cloud" workout and the always tough "stuck next to B.O. person" workout.

that's classic, I definitely know some people that applies to. :)

Yeah, I can just see the Games organizers now, getting on the P.A. system... "Could we have a few volunteers with really bad odors please report to the tent before the next event?"

In all seriousness, though, having an NA clause is a great idea. It gives you solid ground to stand on in a situation that could get dicey. And, the, "strives to provide a positive and encouraging environment for our clients" sends a clear message to all your members about what you're trying to create.

unfortunately the "asshole" at my gym was also enough of a kiss ass that he wheedled himself into a position of somewhat power...his programming blew and his tude was just ridiculous so for the time being I'm freelancing from another gym. There wasnt enough room in our little box for his ego and half of the original members.

Not many types of people provide a greater emotional training challenge than assholes. I work as a psychologist in solo independent practice. I run something like a box, but at my box the training focus is emotional fitness. Emotional fitness can be developed and trained just like physical fitness.

How I manage the assholes that show up at my office is directly related to my level of emotional fitness.

To skillfully manage an asshole one must develop emotional fitness equivalent to the physical fitness required to turn in a great Fran time.

If I am not emotionally fit, I cannot handle the assholes very well at all. When I am in great emotional shape, I can handle some pretty heavy intense assholes.

The NA clause is definitely a good way to enforce clients, not speading negativity. But having made it a mission to visit as many boxes and meet as many owners/ trainers as possible, there are also assholes that work at these boxes as well, although its more rare. This in my opinion is just as bad if not worse.

Hey I would appreciate it if everyone stopped talking about me...assholes have feelings too.....jk.....hilarious line kof comments.

Assholes are a part of life, every gym, every aspect of life has them. Use them as a movtivating force, chase them then beat them. Really for a fitness community that gets it kicks with t-shirts like:

-"Your workout is my warmup"

-"It's all jerks and snatches"

-"If Crossfit was easy it'd be your mom"

These complaints come accross as somewhat hollow. Crossfit has culitvated a rebel image, don't be surpirsed if it attracts...rebels.

One final thought based on an old gamblers truism: If you can't tell who the asshole is at your gym...maybe you're it.

Its the truth...there should be an asshole clause for everything from work to driving. And it really is about how its said, some people can say negative things and make you do positive work, the problem lies in the people that feel above all others. The Asshole claus is perfect!! Wether you workout with 20 people or 2 you have the right to trim the fat!! Some people do not play well with others, the rest of us do. You have to love the fact that when you watch the CF games there is not a quite voice in the crowd. Everyone is pushing for every participant.....Thats how it should be every WOD!
I think most of us are lucky and have that crew every day

Scott-I tend to agree with your perspective: Crossfit cultivates a rebel mentality.—an elitists community, if you will.
I for one enjoy the rough-around-the-edges personality it breeds. With all the testosterone swirling through the air you're bound to have the occasional off comment/member. Use it as motivation until it truly becomes an unavoidable distraction then, bye-bye asshole.

"Really for a fitness community that gets it kicks with t-shirts like:

-"Your workout is my warmup"

-"It's all jerks and snatches"

-"If Crossfit was easy it'd be your mom"

These complaints come accross as somewhat hollow. Crossfit has culitvated a rebel image, don't be surpirsed if it attracts...rebels."

I take these slogans as 'playful'. Even rebels still have rules. Be a rebel, but don't be an 'A hole'.

Every CF'er that's visited or regularly does the WOD at my box is sound as a pound.

Agreed. My gym is full of great people that have truly become a small community of encouragment.

My comment is simply to illustrate that the problem of assholes in one of degrees. While we're complaing about assholes in our gyms we are blind to the fact that this whole movement feeds off of tearing down other peoples long held beliefs. We call it revolutionary but if you're on the other side you simply see a lot of loud brash assholes with tasteless shirts.

You wearing one of those above mentioned t-shirts would label you an asshole in my book. And yet the Crossift community at least on the main site seems to revel in such in your face displays.

As for being humbled by women and children, happens to me everyday...most of the time not even in the gym!

"I take everything seriously except myself" (unknown)

A sense of humour is just as important a value as humility. I laugh at the stupid CF and non CF stuff I've done - and I laugh at others doing the same ;-)

CrossFit Challenged my "long Held Beliefs". That is rare in today's society, I believe - to be truly challenged. I think this is a crucial element to growth, which to me is paramount to my continued success.

I agree some of the slogans are completely distasteful - but I'm still willing to be challenged about my beleifs, if it means at least occasionally someone in the community gets a little excited and doesn't think before they print a thousand T shirts with a stupid slogan on it :-)

Interesting piece. I always think that BJJ self-selects against assholes in a way that no-gi grappling and striking don't. If you do BJJ in a gi, it doesn't matter how big you are - you are going to get constantly tapped out as soon as you start, and probably more so (by the better people in the class) if you try to bully people you perceive as weak. Assholes can't handle being tapped all the time and very rarely come back...