Justin started the show by reminding listeners about the Lumberjack CrossFit Memorial WOD and fundraiser being held on Saturday, Dec. 5. For more info or to donate to the families of the Fort Hood shooting victims, click here.

2:30 Affiliate owner and motivational speaker Kyle Maynard came on the show to talk about his involvement in the the Comprehensive Soldier Fitness Program, which is also supported by CrossFit HQ. After explaining the program and how CrossFit is helping forge elite fitness for Army personnel and their families, Kyle spoke about his role in the endeavor and the impressions he had when a new fitness facility was opened at Fort Leavenworth. Kyle also gave an update on the documentary film that chronicles his MMA career before talking about how his girlfriend, Talia Markham (Miss West Virginia), has taken to CrossFit and the Paleo/Zone diet.

24:14 CrossFit Endurance athlete, trainer and expert Brian MacKenzie explained how he originally figured out how endurance athletes could increase their performance and decrease training time via a controversial new method that was not immediately accepted by traditional endurance athletes. Brian went on to give endurance/CrossFit training advice, explaining how affiliate owners can add a new dimension to their business by offering the endurance athlete a more efficient training program. 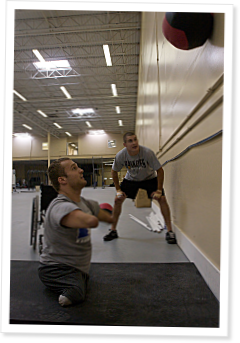 On Episode 178 of CrossFit Radio, host Justin Judkins interviewed Auvie Kincer, one of the organizers of the Afghan Games, and Aja Barto, who just won the South Central Regional… Continue Reading