Every CrossFit movement has major form faults such as loss of lumbar curve in a squat or muted hips in a med-ball clean. In stone shouldering, one of the worst faults is simply not trying hard enough.

Lifting a barbell is far easier than lifting an atlas stone, and odd-object lifting has a set of rules all its own. Kurtis Bowler of Rainier CrossFit teaches how to get a heavy stone from the ground to the shoulder, then goes over the major faults of the movement.

Many athletes will set up too far away from the stone and treat the movement like a squat instead of a straight-leg deadlift, while others will ignore core-to-extremity movement in an attempt to curl the stone. Others, of course, lack the grinding determination needed to get an awkward object onto their shoulder.

During a practical session following the lecture, Bowler leads a group of athletes through a lifting session and helps them get the form right for maximum safety and efficiency. 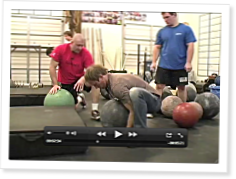 Being Strong for Fragile X: Part 1

You could argue that picking up a stone or other awkward object is even more functional and realistic than picking up a barbell, so it’s no surprise some CrossFit affiliates are integrating strongman… Continue Reading

CrossFitters aren’t big on giving up, so when Kurtis Bowler discovered his son Casey has a condition called Fragile X, he fought back.

Bowler is the owner of Rainier CrossFit and a… Continue Reading

The Finer Points of Flipping Tires

Kurtis Bowler of Rainier CrossFit is a CrossFitter with an affinity for strongman movements, and in this video he goes over the various ways to flip a tire.

You can… Continue Reading

Who says big men and women can’t be graceful?

“This one is all about walking smooth,” Kurtis Bowler of Rainier CrossFit says of the yoke walk.

Thnx Kurtis, great video, Bruddah, I rocked these 2 weeks ago supersetted w/sprints around the Globo gym next door :)

The high school athletes crank the sandbags onto the shoulders

Another GREAT video on how to use stones. Please keep them coming. If anyone knows where you can buy stones in the Northern Virginia area please email me at ghodges57@gmail.com.

I'd also be looking for a place to pick up molds, as well as info on any alternatives to concrete that can be used for training purposes, such as a silicate or rubber compound.

The only place I know of currently that carries top-end stuff is Slater's Hardware in Ohio.

Jason, we've been using what we call "rockballs" for several years.
They are not as heavy as an Atlas stone, but still good to train with.
All you need is a stability ball, a large funnel,several bags of river gravel, & plenty of tape.
Cut a flap in the ball (don't cut it completely off), put in the funnel and fill it to the weight you want.
Close the flap, tape it with duct tape or grip tape, and you're all set.
You can make a 120lb ball very inexpensively.

If you ever make it out our way stop by for a workout Zach. We did a good one a while back. It was sandbag carry, stone shoulders, and skin the cats. We carried about 50 yards, did 15-12-9 on the shouldering and did 8 skin the cats.

Slaters is the place for getting stone molds. I don't think you will find many people selling pre-made stones. There was a place in Idaho called "Stoner's Gym" but their website is down.

I just finished up a stone making video I'll be sending in soon.

Kurtis (even though it says Laurie)

Thanks for the tip- I'm willing to bet they'd go over quite a bit better with my landlord than me lugging around- and mixing- bags of cement.