In this video filmed in Boston after Tanya Wagner was named the World’s Fittest Woman in Aromas, Calif., the champ reflects on her experiences during the first day of competition at the 2009 CrossFit Games.

Wagner’s strategy for the first WOD was simple—just get through it and don’t finish last. The eventual winner confirms what other competitors have already said of the hill run: it was a brutal, grueling challenge that truly set the tone for the rest of competition.

After notching a 25-lb. PR in the deadlift WOD, Tanya battled through three more events, including the row-sledgehammer-row event that introduced a new movement to the CrossFit arsenal. Tanya also had the “advantage” of watching her husband Josh suffer through the last event of the day before she had to grind through the wall-ball/snatch WOD herself. Tanya finished fifth in the challenging couplet and solidified her place in the Top 16.

With Day 1 behind her, she had precious few hours to recover for Day 2, where three WODs stood between her and the overall title. 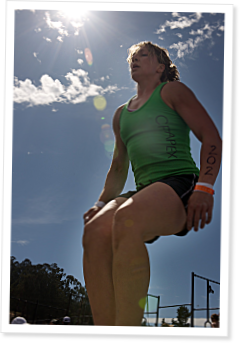 “Muscle-ups”—the worst word you could say to Tanya Wagner at the CrossFit Games. Wagner can do them, but not always, and when the final chipper was announced, she wasn’t sure if… Continue Reading

Josh and Tanya Wagner are officially the cutest couple in all of CrossFit.

It would be sweet if you did more than just a sit down interview with her. Something more like what you're doing with Mikko (which is awesome by the way, maybe thats what part 2 and on will be), I know my wife would love to see her routines, workouts, day in the life of, stuff like that. Plus she's just cool, so it be great to just follow her around a bit (for us at least, ha!)

Jesse: Where can the videos on Mikko that you're talking about be found?

It's so nice to hear such open confessions from the champs. Thanks Tanya, you really give us an idea of what it was like.

Simon - just on the main site, not the journal, the Dec. 9th post there's a preview for "SISU" the Mikko Salo documnetary that's coming, and then Dec. 17th post there's another short video about him as well. Pretty cool.

are we gonna get footage of the Women's portion of the games like we have been with the guys?

I second Jesse's request - I would love to see an "Every Second Counts" about all the participants of the Games and a "Sisu" about Tanya Wagner, but for some reason women's training, struggles, and performances just do not seem as compelling to the official Crossfit/CFJ film people.

footage from the women's comp is coming in the next day or two. And there are plenty of CFJ videos documenting the road to the games for several women competitors. So lets not jump down the throats of the Crossfit officials about being sexist.

Oh great let me know where I can find the movies about the female competitors. You seem to have it all figured out.

Olivia,
Are you kidding? Have you become a troll? The Games vids are 19 parts and they are coming out in order as promised.

You know what, I'm going to actually say what I have to say instead of using sarcasm as I did above, because I care about Crossfit and I don't want to see women marginalised in the official media coverage of the Crossfit games nor the movie-making venture that Crossfit has gotten into.

I know the 2009 Crossfit Games footage of the women's competition will be aired after the men's and team competition footage. I pointed that out to someone else a few days ago on another article. I am looking forward to it and have every confidence it will be as comprehensive and well made as what we have seen of the men's competition.

My post was about Crossfit's movie "Every Second Counts", which ignores the women's competition entirely, and the news that there will be another film that focuses only on the 2009 men's competition winner.

It's very frustrating to see imbalances like this in the media treatment of male and female athletes who participate in the same competition. Even more frustrating is to have my comments dismissed when trying to speak up and encourage the official media body to incorporate equal screen time to men and women. It is yet more frustrating to try very hard to be encouraging and positive instead of disappointed and alienated and yet still be told I'm jumping down throats and crying about sexism that apparently doesn't exist.

I was referring to the full length movies, not the videos! And no I'm not trolling, I just lost my temper for a second and resorted to sarcasm. Obviously there are no movies about female competitors of the Crossfit Games - but there are many videos on the journal as you've pointed out; I have watched all of them!

Tanya,
Awesome job at the games this year! Looking forward to hearing more about your experience at the games. You truly impressed the hell out of us. Do you plan to compete for the title again in 2010?

I have often wondered if the elite CrossFit athletes were as down to earth as they appear on the videos. At my level one certification to my surprise Tanya Wagner was present. I had a feeling of starstruck when I went to the registration table were I was met by Tanya Wagner and Jenni Orr. I was extremely surprised how approachable and friendly Tanya was and it made me appreciate the CrossFit community that much more.

Keep up the great work Tanya and congratulations again!

My wife and I think you guys have done a great job highlighting the women of Crossfit.

Also, when is "SISU" scheduled to release? Is there a date set?