The Army-Navy football rivalry is world famous. Just as fierce, though, is the Army-Air Force rivalry. On Nov. 7, 2009, the two football teams competed in Colorado Springs, Colo., and Air Force won 35-7. That same day, a new tradition began: the Black and Blue CrossFit Competition. Air Force

The two 10-person teams hit a WOD including pull-ups, rope climbs, running, box jumps, wall-ball shots, walking lunges, burpees, rowing and a duffel-bag/buddy carry. Of course, bloody hands and shins made their necessary appearances during the inter-services competition, which was narrowly won by the Air Force with a time of 42:21.

Next year Army hopes to even the score with a WOD hosted on their turf in West Point, N.Y. 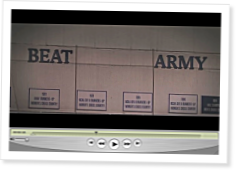 Beast of the East

The March to the Finish: The Ranger Challenge Part 3

Welcome to the Beast of the East Throwdown hosted by CrossFit New England in November 2010. CFNE owner Ben Bergeron says the event was a huge success.

“Be ready for the pain but relaxed deep down inside, but most of all, enjoy yourself.”

Maj. Shane Finison might be directing a WOD at CrossFit Durham or he might be preparing the… Continue Reading

In Part 2 of this series, the Ranger Challenge team from Duke University competes in a series of events designed to test their skills.

19 Comments on “The Black and Blue CrossFit Competition”

Looks pretty cool, obviously the altitude probably played a factor on the Army's behalf. Too bad they can't come to Marine Corps OCS for a workout ;).

If they came to USMC OCS they would all get worked!

Hell yeah! As a 2008 USAFA grad its great to see the service academies getting on the CrossFit wagon.. now if we could only Active Duty Air Force to embrace it...

Thanks for the video. Any way you can make this a video a free download? I am an admissions liaison officer for the USAFA (and long time CFer) and would like to share this with my candidates for the Academy (and fellow liaison officers too). Of course, I recommend Crossfit to them as great preparation for the service academies.

Pretty cool to see. I wish they'd had a Crossfit club at the Zoo back in '05. Anyone know if they are running CF down there for fun, or are they having Recondo kids doing it and stuff?

Benjamin--The CrossFit affiliate here at West Point is not an official club, although we have tried. Black and Gold CrossFit is however a legit affiliate with trainers and a great facility. They took half of the old '62 room/boxing rooms and gave us a pretty good space. Lots of trainers and a 5 day on 2 day off programming cycle. The big crowd meets at 0530 every morning but there are smaller groups that meet at other times of the day and some who just hit the workouts individually.

This competition was a lot of fun to see and hopefully something that will take root in our respective academies. I personnally thing that CF as a sport is a great idea. I would love to see some sort of tri-service event with West Point, Navy, and the AF Academy all represented. We have the crew here and I know that AF has a great group, now we just need to get our squid brothers on the hook too. I even like the idea of Marine OCS playing, I'm pretty sure it wouldn't be the "working" that Danny has predicted.

Oh yeah...and thanks to Tony for setting this whole thing up. Tony along with Jordan and the crew spent a lot of time making this thing go.

CrossFit at USAFA is actually under a club called USAFA Combat Conditioning Club. The club put together a racquetball court with 3 lanes and all the required equipment for workouts. Recondo is a separate program that runs its own/different workouts.

You would be glad to know that there are also bi-weekly workouts at 0550 which are typically attended by 15-30 cadets depending on the cadet schedule. Obviously we can't have 30 people knocking out olympic lifts at the same time but we do get pretty creative on how to scale/adjust the typical WOD's. We are also pursuing some Level I certifications and an affiliation which should help the club.

Also, thanks to Jordan for the outstanding video and spending extra time with our cadets. Thanks Tony for your help designing this killer workout!

An outstanding video, especially for this 68 yo former USAF flight surgeon with the 366TFW, and 390TFS at DaNang '70. Have been a lifelong runner and now an avid CrossFitter for the last year. Our military (all branches) is populated with the best young men and women America has, and it is great to see this kind of dedication to fitness and leadership.

Ben - I say next time we're up there we have an '05 alumni vs. cadets WOD-off! I'll join the team if you will!

Awesome video and good to see that Crossfit is finding a home over there, I know where I'm doing my WODs next time I'm in the Springs. Great job on the WOD everyone, I'm sure sucking down that musty field house air was no joke. Way to go blue!

USAFA '94 checking in; can't wait to see next years results. Now if the kool-aid would just filter out a little faster to the remaining nautilus-loving, 3 sets of 10, elliptical overrun gyms in the AF (like my current one)

USAFA '02 here. Harumpf Boss! Just got busted for bangin weights too hard on a oly platform. Next I'll wear a liatard, chuck t's and a handlebar mustache to mess with em. Roll fast, bang hard.

Awesome stuff.. Maybe we can get more AF base leadership worldwide to embrace the CF mindset..

Awesome video! Brings back fond memories of the PFT and running countless intervals on that track with the boxing team :) Ashley I agree, a lot of people on active duty could use a little CF. Some base gym's are getting better but often it's hard to find pull-up bars, let alone bumper plates in most gyms...but not at USAFA. Keep up the good work zoomies!

Go Zoomies! Hopefully the AF will start getting in shape. If anybody is stationed at Elmendorf AFB or just stopping through come check out the new CrossFit gym in Hanger 5. Sloan Green - USAFA '07

I already know a good WOD for when the AF heads to the point. 5 rounds I.O.C.T (indoor obstacle course test) for time.