CrossFit Works and the Games: The Ding Series Part 5

By Jennifer Higgins and Carl Wells

For under $350, Tony Budding and Rory McKernan traveled to Tuscon, Ariz., on the Southwest Airlines Ding program. While there, they visited affiliate owners Jennifer Higgins and Carl Wells of CrossFit Works.

When Jen and Carl opened their box, perhaps the most surprising thing was the fact that they were often introducing people to CrossFit for the first time. They were initially worried that seasoned firebreathers would comb the gym with a critical eye, but in reality they were met by a group of blank canvasses, and everyone was eager to learn about the program.

The CrossFit Games did not play a large part in last year’s training at CrossFit Works because most people felt the competition was out of reach. However, the competition standards are now a training tool the coaches are using to encourage full range of motion, and several reps are disallowed when one athlete takes on Tony Budding in a WOD featuring chest-to-bar pull-ups, wall-balls and handstand push-ups.

If athletes at CrossFit Works didn’t pay much attention to the Games last year, things are different in 2010, with a larger number of clients interested in either team or individual competition.

As the Ding Tuscon adventure draws to a close, stay tuned until we visit our next host: Ute CrossFit in Salt Lake City, Utah. 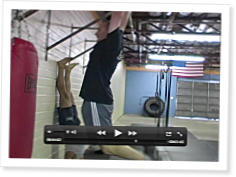 For Competition and Community: CrossFit Bellevue

By Dan Cerrillo and Matt Hasselbeck

By Lisa Ray and Mike Ray

Lisa and Dr. Mike Ray, co-owners of CrossFit Flagstaff, give us the tour of their box and CrossFit home in Flagstaff, Ariz.

The Rays began CrossFitting in 2004 out of their home. In… Continue Reading

After being coached through a WOD by Hackenbruck, Miranda… Continue Reading

6 Comments on “CrossFit Works and the Games: The Ding Series Part 5”

This entire ding series has been awesome! What a great way to highlight all the great affiliates out there!

Great job highlighting Jen and Carl at Crossfitworks! They are awesome people and have put together a great crossfit gym. I had a couple years of crossfit experience before I started training there and I'm still just as enthused about crossfit as the day I first found the main crossfit website.

I really loved this Ding series thing. I hope you guys do another one!

The Ding Series was great! Are you guys going to do more?