CrossFit Games champion Tanya Wagner prefers setting her sights on her competition and playing catch-up rather than being chased from behind, so it was almost disconcerting for her to hear she was No. 1 after five events at the 2009 Games.

Wagner thoroughly enjoyed the snatch WOD that opened Day 2 of the Games and was motivated to reach 135 lb. both by the crowd and the always enthusiastic Mike Burgener. The next WOD, however, was a true challenge for the eventual champ: fixed-width handstand push-ups, heavy kettlebell swings and GHD sit-ups.

Wagner doesn’t have access to a GHD in training, and the kettlebell was slightly different than what she was used to. Handstand push-ups, of course, were incredibly difficult for most of the female athletes, and several had their hopes dashed after failing to complete a single rep in WOD 7. Tanya realized the workout was more about survival than pushing to the limits, so she worked hard at it but tried to save her shoulders for the chipper and the final race to the podium. 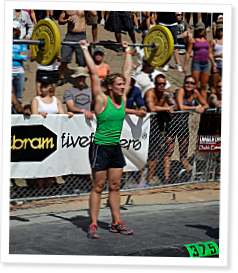 The CrossFit Games push the body to its absolute limit, but the annual event might be even harder on an athlete’s mind. Managing exhaustion while competing against the… Continue Reading

“Muscle-ups”—the worst word you could say to Tanya Wagner at the CrossFit Games. Wagner can do them, but not always, and when the final chipper was announced, she wasn’t sure… Continue Reading