“Muscle-ups”—the worst word you could say to Tanya Wagner at the CrossFit Games. Wagner can do them, but not always, and when the final chipper was announced, she wasn’t sure if she’d have 10 of them after putting her body through seven gruelling WODs.

“My stomach just dropped because of the muscle-ups,” Wagner said. “I have to say that was probably the absolute worst part of the entire weekend.”

In fact, Wagner can’t even remember much of the chipper because she was so focused on fighting through 10 muscle-ups. Her judge actually had to direct her through the chipper, which she finished in 29:39 (seventh) to claim the overall title.

“It was a good finish because I finished,” Wagner laughed.

As for the 2010 Games, Wagner might not defend her title in favor of attempting to qualify a team from CrossFit Apex in the Affiliate Cup. She was so inspired by the teamwork and spirit of the almost 100 teams that battled it out in the last Games that she might just take part in the team section of the CrossFit Games. Either way, Wagner loves CrossFit and is certain to be in Aromas in some capacity. 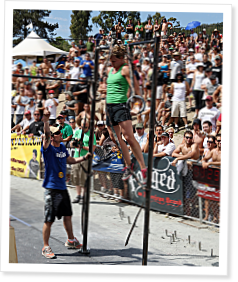 The CrossFit Games push the body to its absolute limit, but the annual event might be even harder on an athlete’s mind. Managing exhaustion while competing against the best… Continue Reading

In this video filmed in Boston after Tanya Wagner was named the World’s Fittest Woman in Aromas, Calif., the champ reflects on her experiences during the first day of competition at the 2009… Continue Reading

...gee, Tanya...THANKS...that shouldn't give me ANOTHER month of nightmares. Yeah, I'm probably gonna' sleep like a baby.

Love your videos, girl. Biggest SPAZ I've ever met, but that's why we're all crazy 'bout ya ;) Good luck in Boston (we live there!). Travelling that weekend for HQ, but my kids will be there with my husband yellin' for ya! SHOULD we make WE LOVE WAGNER signs!?!

Tanyas enthusiasm is so infectious! Even when she is talking about how bad it was!