Learning How to Do Full Snatches by Bill Starr - CrossFit Journal

Learning How to Do Full Snatches

Bill Starr breaks down one of the most difficult athletic movements you’ll ever perform. Put the pieces together to master the world’s fastest lift.

The full snatch is one of the most complicated movements in all of sports. An athlete has to pull a weight upward with force and speed, then completely reverse his mental keys to explode downward under the still-moving bar. To be able to perform a snatch with a maximum poundage is a feat of strength without peer.

Full snatches have value for all athletes because they involve so many of the larger muscle groups in a dynamic fashion. In fact, every muscle in the body is activated during the execution of a full snatch, including smaller groups such as the biceps and calves.

The snatch is a high-skill movement, so every rep requires absolute concentration on the part of the athlete, which means the nervous system receives much more stimulation than when a static exercise is done. Whenever an athlete masters the technique in the full snatch, he has learned to trigger the necessary form cues instantly, and this skill is transferred to all his other athletic endeavors.

In other words, learning how to do a full snatch benefits not only strength but many other athletic attributes, such as flexibility, coordination, foot speed, balance, timing, determination and mental acuity. 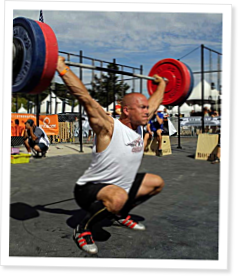 There was a time in the not-so-distanct past when everyone who lifted weights possessed wide, powerful shoulders… Continue Reading

Everyone who ever set out to… Continue Reading

8 Comments on “Learning How to Do Full Snatches ”

More articles like this please, articles that actually deal with performing exercises and training.

Can you actually master the snatch?

Does anyone else think that the sequence on page 8 shows a changing back angle? Frame 1 shows at least a 30 degree angle to the ground, and then by frame 3 the back angle is roughly parallel to the ground. The caption then says 'note the consistent back angle during the first pull'... I'm confused.

Great to have more olympic lifting articles. My favourites would still have to be the Burgener progressions though.

Pictures like this can be misleading. I'm not sure if what you are seeing is a true change in the angle between her back and the ground or an optical illusion.

Either way, it doesn't really matter. The point still gets across that a more consistent back angle is better than a less consistent back angle. This is an elite-level CrossFit athlete performing at maximal loads. We wouldn't expect her form to be perfect, but simply close enough to the characteristics Coach Starr describes to be successful in the lift.

You are correct: there is indeed a change in back angle between frames 1 and 3, but the "consistent back angle" caption is not meant to include the starting position (Frame 1). It would be ideal if an athlete could maintain the exact same angle from floor to above the knees, but the ability to do that is often limited by an athlete's proportions or the starting position she has chosen.

It appears in the first frame that the bar is touching Kristan Clever's shins, with her knees protruding slightly over the bar, which would necessitate a change in back angle for clearance. It's difficult to tell the exact relationship due to the angle of the shot. The back angle from frames 2 to 3 is essentially maintained until the bar is above the knees, and that's what the caption is referring to.

Is the change between frames 1 and 2 too extreme? That, of course, is debatable, as are many aspects of Olympic lifting. In any case, perfect form is very difficult to master or catch on camera. If accompanying pictures are ever less than ideal, please refer to articles by Bill Starr, Mike Burgener and other experts for exact descriptions of technique.

Thanks Mike that does help!

Thanks for the replies Mike and Russell. I just wanted to clarify that in my own head, and that's cleared it up.

I think it is possible but with everything there is always room for improvement. I read an article that stated a true Oly Snatch master has completed 10,000 perfect reps. So imagine a lifetime of snatching and you will get it mastered.