3:16 CrossFit Journal managing editor Mike Warkentin was on hand at the Central Canada Sectional this past weekend. He gave updates and observations on the events, the athletes and their performances in the middle of Day 1, then again as the event concluded. Mike was at the 2009 CrossFit Games and talked about how the qualification process has evolved in 2010.

27:00 Ian Kellogg was a volunteer interviewer for CrossFit Radio this past weekend. He gave his impressions of the Virginia Sectional and what it was like to be right in the trenches, so to speak, with the athletes as they competed throughout the weekend.

35:00 Jeff Tincher was one of the organizers for the Virginia Sectional. As a 2009 Games competitor and top 5 finisher in 2008, Jeff was uniquely qualified to organize the event and provide the programming for the WODs. Jeff gave his thoughts on the competition as it wrapped up and offered some insight into what went into planning the event and the WODs. Jeff talked about the performances of the athletes and what he’ll take away from the event.

44:46 Ian Kellogg interviewed three of the athletes live on location at the Virginia Sectional. He was able to talk to the men’s winner, John Steger, and the women’s first- and second-place finishers, Gretchen Kittelberger and Meghan McNally, respectively. Each talked about her preparation for the competition, her strategy and her nutrition for the event. 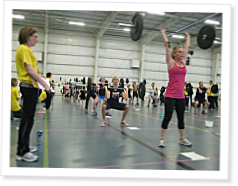 CrossFit Radio Games Special Edition #4 was webcast live at 6:00 PM PDT on July 11, 2009, when results from four out of the day’s five events had been announced.

Mike Warkentin of the… Continue Reading

Thanks for the links. An enjoyable and interesting radio show, as usual. The cat was probably wondering why I was chortling while I was brushing her!