2:10 Michelle Kinney is a trainer at CrossFit Bartlett, and despite being fairly new to CrossFit, Michelle made a statement by winning the Southeast Regional and qualifying for the 2010 CrossFit Games this summer. She spoke about dialing in her nutrition and the way she programs her two-a-days. She also detailed her preparations heading into the regional and the things she will focus on for the final weeks before the Games.

24:35 Damon Stewart owns Wasatch CrossFit with his wife Priscilla. Damon talked about the learning experiences he’s had since opening his affiliate and some of the successful things he’s implemented. Damon spoke about the marketing he employs and which media choices have proven the most effective. He explained his philosophies about his website and how important the right image is for his business.

47:47 Bayou City CrossFit owner Vic Zachary recently punched his ticket to the Games with his first-place finish at the South Central Regional. Vic talked about his athletic background and why CrossFit is the perfect fit for him, his diet and programming, and his final preparations for the Home Depot Center. Vic also gave information on a fundraiser his affiliate is doing called Perseverance Through Hardship: 57 reps for Texas Children. 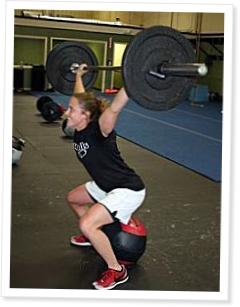 Michelle is such a great athlete and down to earth girl! Everyone here in Madison, AL will be cheering you on at the Games this year! Great interview!

We love ya, Michelle! Great job getting to where you are now, but it's not over yet!! We have faith in you! You are a beautiful beast!!

Typo.. cited Vic as the Southeast regional winner, then again as the South Central! Can you say 'whoops'?