Rise of the Euro? by Blair Morrison - CrossFit Journal

Rise of the Euro?

American Blair Morrison won the Europe Regional but reports that the Old Country is full of unbelievable athletes who are sure to be in the mix at the 2010 CrossFit Games.

The weekend of the Europe Regional is difficult to summarize. It was exhilarating and exhausting, with a more fulfilling end than I ever could have hoped for.

It featured the standard elements of the CrossFit experience: anxiety, exhaustion, pain and joy. There was sacrifice, ambition, humility and satisfaction, often co-existing within a single person at a single time. I felt undercurrents flowing between athletes and groups, giving the competition life and depth while forming a perfect balance between rivalry and collectivity.

Such human elements were the real beating heart of the Europe Regional in Halmstad, Sweden, so a mere re-telling of the WODs and their outcomes would do the greater experience a severe disservice. My aim, instead, is to tell a different story, one where the events themselves are more means than end. In my opinion, this event was a rare combination of cultures and peoples. In their blending with one another, one saw different support systems operate alongside one another to the benefit of all, as well as a validation of the friendships CrossFit inevitably forges. 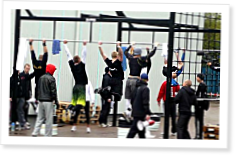 Blair Morrison finished seventh at the 2009 CrossFit Games and is working to get back to the competition while studying in Europe. Living abroad has brought its share of… Continue Reading

The Story in Africa

The Africa Regional has come a long way since 2009, when it was held outside on a grass field. In 2014, it was held at the Coca-Cola Dome in Johannesburg, South Africa.

“We had a… Continue Reading

CrossFit competition is evolving and growing fiercer every year. Emily Beers talks to coach Brian Bucholtz and athlete Kara Webb about how the CrossFit Competitor’s Course helped them… Continue Reading