Tough for Whom? by Andréa Maria Cecil - CrossFit Journal

“We don't need to do any special training for it. We could do it tomorrow.”

That’s what CrossFit York owner Rusty Mirasol repeated in the two months leading up to the Tough Mudder, billed as “the toughest one-day endurance race on the planet.” He got the occasional skeptical look from various members competing in the race as part of the so-called CrossFit York and the Snatch-A-Licious Team 4. The inaugural Mudder promised to challenge all the squats, pull-ups and muscle-ups this group of 14 CrossFitters had been practicing at the York, Pa., box for months.

British Special Forces designed the course at Bear Creek Mountain Resort near Allentown, Pa., “to test all around toughness, strength, stamina, fitness, camaraderie, and mental grit,” according to the event’s website.

“Forget about your race time. Simply completing the event is a badge of honor. Not everyone will finish,” the Web site boasts.

About 10 minutes after the last CrossFit York team member stepped over the Mudder finish line Sunday, May 2, Mirasol declared, “I don’t see any reason why everyone can’t train tomorrow.”

The next day, more than half the team showed up at the box for three rounds of 10 kettlebell swings, 20 push-ups, 30 sit-ups and 40 double-unders. 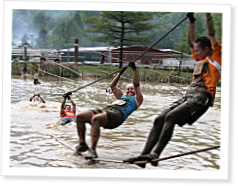 The world’s best swimmers move through the water with grace, economy, and flow, while novices are awkward, clumsy, and inefficient. But the rest of us can learn to swim well if… Continue Reading

Since January, I've been on thirty-nine flights. The madness started with a writing assignment to cover cat skiing in southern British Columbia: ten days. Three weeks later, I… Continue Reading

As one of 7 solo attempts at the 4th Hardest Race in the World (Odyssey Endorphin Fix 2-Day Adventure Race, 200+ miles, 60,000ft of elevation change) according to the Peak 100 list (www.100.Peak.com), I have one thing to say to that #1 Hardest claim... Bwahahahahahaha!

As one of 7 solo attempts at the 4th Hardest Race in the World (Odyssey Endorphin Fix 2-Day Adventure Race, 200+ miles, 60,000ft of elevation change) according to the Peak 100 list (www.100.Peak.com), I have one thing to say to that #1 Hardest claim... Bwahahahahahaha!

We are doing the one in SF area in October! This article was funny since everyone thinks its so hard and its got all this hype behind it! Not for us CrossFitters!!! :) Goooo us! Woot woot! :P

Any other affiliates going to the SF area one in October? Tamalpais CrossFit from Marin County is! :)

We are doing the one in SF area in October! This article was funny since everyone thinks its so hard and its got all this hype behind it! Not for us CrossFitters!!! :) Goooo us! Woot woot! :P

Any other affiliates going to the SF area one in October? Tamalpais CrossFit from Marin County is! :)

There were also 4 of us from Guerrila Fitness Crossfit Montclair in Montclair, NJ who participated in this race. Crossfit Morristown from Morristown, NJ also represented the CF community. We all agreed it was definitely not as hard as some of the harder CF WODS.

Don't forget about CrossFit Apex completing the mudder at Bear Creek. We had a blast however we all discussed following the race that we could have done it again the SAME DAY. I definitely think Fran is worse! We did have a great time, definitely would encourage others to do the mudder.

We had a team of 11 CrossFit Long Island City athletes in this one. It was a semi-LSD event with a bunch of rests (obstacles) in between. Felt more like a warm-up. Obstacles were so bottlenecked that, for example to jump in the water, we had to wait close to 30min in line. The most challenging was one short quad-burner, steep hill run. The rest was just a light stroll in the woods. We had fun though, and finished as a team with the group set of burpees! :-)

CrossFit Off The Grid and CrossFit OTG showed up w/ 17 athletes!!

I hope the one out west is more challenging than the Bear Creek hype fest. Vadim said it best...
It was more camaraderie for us than anything else, which made it FUN - not challenging, and certainly not the toughest one day event on the planet..

Josh we agree and would probably never do a tough mudder again, but we're looking forward to the McGuire AFB Mudder in September!!

Hey i completed the original Tough guy event in Wolverhampton UK on January 31st 2010 it was minus 5 degrees and the water sections had to have the ice broken off them before we started, some of the front runners had to smash through the ice themselves.
I am not dis-honouring your achievement of completing the race and I must say with ease by the sounds of it, so well done for that but If you really want a challenge I suggest you try next year’s tough guy in the UK http://www.toughguy.co.uk/ without doubt the cold is the toughest element and I’m from Scotland where we think 19 degrees is a bloody heat wave.
Just started hitting Crossfit the past 2 weeks and i have felt the benefits. When i was training for the race it was high reps and included some Olympic lifting and Body weight exercises but just not to the same intensity and variety of the Crossfit method.
So if you guys want a bigger challenge to put your training to the test the UK toughtguy is one way to do it.
Well done and enjoy!!

There are lots of these type of races poppin up. I did "The Warrior Dash" in Mountain City, GA (there are like 9 different regions for it, were any of you there??) in May and it was a hell of a lot of fun as well. However, I too, thought it was going to be a lot tougher. I understand they don't want there to be many (if any) injuries and thus scale back how hard the race should actually be. Personally, I think they advertise them as they do ("toughest race on the planet", "true warrior test" etc) simply for marketing reasons with NO intention of them actually thinking these adventure races are going to be too hard for the average person. I wish there were more in the middle tennessee area, I'd love to do something like this every month spring-fall.

There was a 10K Mud Run here in Jax, FL a few months back. I was interviewed by a camera guy who asked what did I do to train for the this. My response, "I've been crossfitting for years so I'm already trained". Unfortunately I didn't belong to an affiliate - now I do :-)
However, I would like to take a crack at this one...looks like fun. Crossfit & the people therein rock!

I like the caption at the end of the article: "Fran is harder".

I had a friend (a fellow CrossFitter) pace me on the American River 50 mile run this spring. He had the last ten miles.

At the end of the run there's a fairly large hill.

It worked and I FLEW up that hill. It was my first 50 mile run and I qualified for Western States. Thank-you CrossFit.

Obviously any 5 mile race that claims to be a remote test of athletic endurance is a joke.
That said, this article is to me an example of Crossfit self-congratulatory indulgence and elitist high-fiving. I'm glad all these Crossfitters had a great time, but what's the point of this article? We're all aware Crossfit trains GPP and so you would be at least decently prepared for this kind of challenge, but I was expecting to see numbers showing that they dominated the field as evidence of Crossfit's training efficacy to win these types of events. Instead it was just full of anecdotal remarks about the Tough Mudder being "easy."

I'm going to have to agree with Maury on this one, but still, nice work CrossFit New York.