3:15 Justin Bergh came on the show to briefly talk about all the things that went into making the 2010 CrossFit Games happen. He thanked all the volunteers and judges who worked tirelessly the entire weekend, and Justin talked about his experience and the athletes and their performances. He also passed on some positive feedback the Home Depot Center personnel had about the type of attendees who came to watch the Games.

18:00 Rich Froning Jr. just placed second at the 2010 CrossFit Games. He came on the show to talk about his experience and explained what it was like to enter the arena to compete against well-known CrossFitters who are featured on the main site on a consistent basis. He walked listeners through his competitive experience of the weekend and gave insight into his strategies and his ups and downs over the course of nine separate scoring events.

44:15 Justin did a product review on Rx Jump Ropes. He explained the origin and design of the ropes Dave Newman created. These durable, fast-spinning and consistent jump ropes will soon be carried by Rogue Fitness. Justin gave a glowing review based on the fact that the rope allowed him to actually do double-unders, which is out of the ordinary for him. 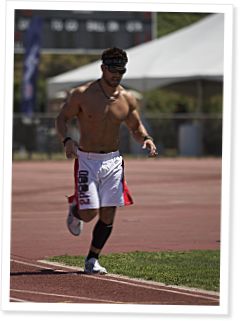 Episode 120 of CrossFit Radio featured Corey Pitsilliti conducting interviews with athletes, judges and other attendees at the regional competition in Australia. During the… Continue Reading

great show Justin. great games. hats off and loads of respect to all those involved (volunteers, broadcasting crew, athletes, coach, tony, dave etc) only managed to watch the 1st and last event smoothly. connection where i'm from is pretty bad and the most of the time it was buffering every few seconds. some people may call that sad but man... it was worth every second. look forward to the downloadable videos soon. in short... FUCKING AWESOME!!!!

Thanks JJ. It was a good review of the weekend with Justin. many thanks for your efforts in the commentary box! Great champions emerge, CF legends live up to their reputations... Can't wait what the upcoming 12 months hold for CF community.