1:40 Graham Holmberg recently won the 2010 CrossFit Games, thus earning the title “World’s Fittest Male.” Graham came on the show to talk about his training and preparation for the Games. He explained how he found CrossFit and what his history has been in the short time since he started CrossFitting. He also spoke about his impressive training volume, which includes doing yoga several times a week. Graham then gave a verbal tour of his impressive weekend of competition, sharing his thoughts and feelings as he progressed through the nine different events of the Games. Finally, he gave a rundown of the last three scoring opportunities, where the athletes didn't know what they would be doing until seconds before they heard, “3, 2, 1… Go!” 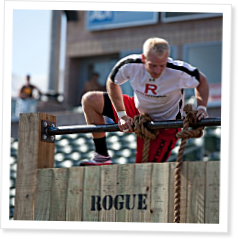 Best episode of Crossfit Radio ever!

What a champ! Congratulations, Graham!

Thanks for sharing some great training tips. It sounds like Graham has gotten really strong without doing much max weight lifing. Is that right?

I would love to hear what Rich, Spealler, and Chan ate coming up to the games as well. I'm beginning to wonder if going too low carb (as in what many people view as a strict paleo diet) hinders performance. I heard both Mikko and Khalipa say they were now eating strict paleo before the 2010 games.

If you remember, Khalipa was noted for eating terrible prior to his 2008 games win and Mikko spoke about loving pasta.

I think this deserves a closer look-see.

Another great show. Thanks again Justin.

Is it possible to get some of the Masters competitors inteviewed? Would be a great contrast between high-level performance of 24/7 fire-breathers, and perhaps those whose age adds "additional spice" to CF. Kind of compare and contrast...For consideration Justin...

Thanks Chad and Everette. Yes Chris you are right but if not a lot of max lifting then a ton of preparation. Graham commented on each event about how he did something similar to it just recently - no wonder he won. John - I'll work on getting Speal and Chan on the show and ask them those very questions. Yes Maciej, great request and I need to get them on the show. I tried to track Heidi Fish down before the Games but was unsuccessful at finding her contact info. I will work on getting some of those inspiring athletes on upcoming shows. Thanks for the comments all.