Adrian Bozman and Chuck Carswell talk about the finer points of judging the CrossFit Games.

Competing in the CrossFit Games is hard, but judging the competition might be just as challenging.

Put yourself in a judge’s shoes for a minute: It’s the last event of the CrossFit Games, and it’s anybody’s race to win. The sun is beating down on you and some classic Metallica is pumping out of the speakers at 100 decibels. Cameras are everywhere. Thousands of fans are screaming. Dave Castro says, “Go!” and one of the world’s fittest athletes is a blur in front of you.

Did you catch that last rep?

Judging isn’t for everyone. You must have a keen eye for movement, and you must be able to make split-second decisions. Being able to count doesn’t hurt, either.

Adrian Bozman and Chuck Carswell are two HQ trainers who served as judges in 2009 and will be reprising their roles in 2010. Both are expert trainers who can spot a muted hip from 100 yards on a hazy day, and it’s their job is to make the competition as fair as is humanly possible for the athletes. 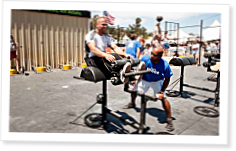 Mike Warkentin talks to the organizers of the Central Canada Sectional and shares some of the best moments from Edmonton.

With fans cheering in the California sunshine, an exhausted Graham Holmberg and Kristan Clever were crowned the… Continue Reading

In this collection of great moments from the 2010 CrossFit Games, Mike Warkentin shares some of the stories that made the Games a truly special event.

Having judged at my regions competition I can tell you that it is absolutely gut-wrenching having to take away a rep from someone who is busting their tail and giving everything they got. Good luck to all the athletes and judges this weekend.

All The judges get serious props. Having been a judge at Regionals, I will tell you it's a stressful job trying to motivate the athlete, ensure you are all over their movements, counting their reps, running their time.... The last thing you want to do is f@ck it up and screw the athlete.

Having been both a competitor and a judge, I can say that it is no easy task and at the moment there is a lot of room for improvement. Crossfit needs to implement some kind of uniform standards (I know, constantly varied and we can debate this til the cows come home) and some sort of certification for judges. Judges also need to be compensated better. At the moment, if you are competent enough to be a judge you will be sent to work in the sun for 12 hours a day over three days for a t-shirt and some sandwiches. That ain't right!

Chuck Carswell= the model of professionalism that I certainly appreciate- I recall a journal comment disparaging him for being "too strict" in enforcing a standard only to have the competitor he was judging jump on and essentially say that Chuck the best and most fair judge he'd had. That speaks volumes. Guys like Adrian and Chuck instantly legitimize CrossFit's enforcing of standards that folks scream "is non-existent" whenever HQ posts a WOD video. You judges do not have an enviable job and do a great job.

What are the standards for being a judge- just interested. What type of training is required and how do you stay in the game? Is instructing a Level 1 Cert and running a Box enough as the speed increases? This is certainly a topic up for discussion as the Games becomes a bigger thing. We all realize the reason behind CrossFitting isn't necessarily competing at any level, but it's still nice to hear about the experiences of a group that doesn't get a lot of recognition. I'd argue the experiences of the judges are far more applicable to me as a coach than an athlete's Games experiences.