2:15 Heather Bergeron came on the show to talk about her preparations for the CrossFit-USAW Open competition that’s taking place Oct. 1-3 in Colorado. Bergeron commented on how unique the competition will be and what strategy she plans to implement for the event. She also spoke about her diet and explained how she is Paleo/zone as much as possible. Planning for a road trip to Colorado, she described the differences in her diet when she’s on the road. Finally, Bergeron talked about her children doing CrossFit and how her daughter studies and enjoys Games competitors just like Heather herself studied NFL players growing up.

32:45 Dave Lipson recently moved from the East Coast to the West Coast and opened a new box a week ago. He explained his reasons for the move and what it’s been like to open a new affiliate. Lipson was recently featured in the Dissecting Dave and Nadia video series and commented on his experience with Coach Mike Burgener. Lipson also talked about the upcoming competition in Colorado and what his expectations are for the event, including his much-anticipated face-off with Josh Everett for the world record for the workout Isabel. Finally, Lipson detailed his future competitive plans and what steps he is taking to qualify for the Games next year. 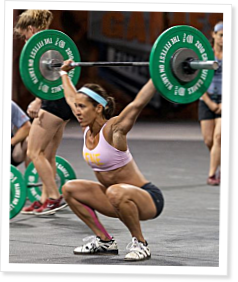 What To Expect: CrossFit-USAW Open

Competing at the upcoming CrossFit/USAW Open in Colorado Springs? You could really use a guy like Mike Burgener in your corner. Luckily, Coach B is here to tell you all… Continue Reading

Thanks Justin I had an awesome time in Colorado. I look forward to seeing you all again soon. Great job with the telecast.
-Dave Lipson

Thanks Dave. Great job at the competition. Watching you squat clean with an injured wrist was inspiring and gutsy. It was great to meet you after talking to you on the phone. Thanks for being on the show.

when you had heather b on the show, she mentioned some type of acid in eggs, which is why she avoids it? what kind of acid is that?

keep doing what you're doing!