By Paul Estrada and Leon Chang

How do you turn good athletes into firebreathers? Paul Estrada and Leon Chang coach a group from CrossFit Elysium through their first competition.

“All coaching is is taking a player where he can’t take himself.”
—Bill McCartney

Several months back, Paul was approached by CrossFit Mission Gorge about putting together a competition between us, them and a few other affiliates. It was only a few weeks since our members had watched Paul compete at the 2010 CrossFit Games California Regional, and a fair number of them thought it would be a lot of fun to compete in something like that.

Our goal was to put together an event that would be open to beginner through intermediate athletes—people who might be the big dogs at their local affiliate but weren’t at the level needed for sectionals. These people also wanted to experience CrossFit as a sport and know the feeling of competition.

Paul went down to CFMG to discuss the details of the event and what we wanted the athletes to get from it. We knew that we wanted a competition that any athlete could compete in and have fun with. We came up with three events that would test all levels of fitness but were not too complicated for newer athletes.

Our main concern was that the event remained about having fun. We didn’t want to turn into “little-league dads” who are only concerned about winning and take the fun right out of the event. Our second concern was helping the athletes mentally prepare for the events ahead and helping them plan in order for them to place as well as possible. We don’t know who was more nervous—our athletes or us. 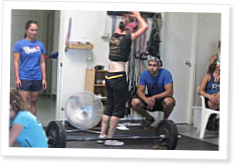 I Am CrossFit Challenge

Jennifer Reed of Atlas CrossFit in Chicago provides her athletes with a motivational program to help them make improvement. Her I Am CrossFit Challenge holds athletes accountable to their… Continue Reading

By John Van Every

Offline, Episode 4: The “Knees Out” Cue

By Russell Berger and Noor Greene

“I think the biggest key to programming for this age demographic is letting them recover just enough to be able to stay focused and go through the next cycle of things,” says John Van Every… Continue Reading

The topic is the “knees out” cue in this episode of Offline, an unscripted presentation of guests debating controversial subjects in the CrossFit world.

2 Comments on “Coaching for Competition”

What you've done for your members is brilliant.

Creating an opportunity for them to experience competition and go to 'that special place' :-)

I bet your members love you guys!

Well done, looking forward to emulating your competition at our box!

Great article and even better event. Congratulations on such thoughtful service to your members.