2:50 In a recent CrossFit Journal article titled By the Numbers, authors Amy Santamaria and Tim Retzik detailed an eight-week Paleo Diet study they conducted at Flatirons CrossFit in Boulder, Colo. Amy explained how and why the study was conceived, then described how 21 people started the study, with 15 actually sticking it out the entire time. She outlined the data they collected and described their findings.

31:45 Skip Miller owns Front Range CrossFit with his wife Jodi. Skip, Jodi and several members of their affiliate were in attendance at the CrossFit-USAW Open competition that took place last weekend in Colorado Springs. The athletes from Front Range represented their affiliate rather well, and Skip described what their training has been like and outlined several of the programs offered at his box. 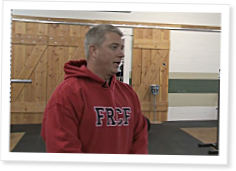 On Episode 348 of CrossFit Radio, host Justin Judkins interviewed Nikki McGowan and Carl Paoli. This episode was webcast on Sept. 24, 2014.

Mobility WOD blastin' bastards!!! I love it man... Hell yeah I watched all of you at the USAW competition. Thanks so much for hosting that event. Awesome show once again JJ, we all love you! Congrats to the athletes and coaches and Front Range CF

I was really interested to hear the paleo study. It sounds like it mirrors my results exactly. I've never leaned out like I did on my paleo challenge. I wish there were more studies out there for it. I also like to hear the reactions doctors have when you tell them how you ate to lower your cholesterol. Good stuff.

Justin,
I finally caught up from Episode 1. Thanks so much for this show. One comment: when you say "Now for the part you listen for, the interview", we listen for you, too. You do always have great guests, but you are the one we know will be there and yours is the voice that pulls it all together.
Greg

Great episode. Really appreciate the hard work Justin puts in on this, thank you!

Let me start out with saying that I listen to this show in the car all the time, and I love it! But, is there any way you can improve the sound quality? The voice of the interview subject is waaay lower than Justins. Which means, that since I love the show I have to turn it way up, and when JJ's voice kicks in it drills a hole in my ear. Not good for my hearing.

Greg and Damon,
Thanks so much. I appreciate you listening to the show. And Damon you did well in Co. Springs- good job.
Kim, thank you too. I usually use software that evens things out. For some weird reason it didn't work with the interviews I had recorded. I'm not sure why but I am working hard to figure it out so that it doesn't happen again. Sorry for your eardrums.