Planning for a Win by Josh Everett - CrossFit Journal

Planning for a Win

Josh Everett reveals the six-week training program that earned him a victory in the 85-kg class at the CrossFit-USAW Open in Colorado Springs.

When I first heard of the possibility of a CrossFit weightlifting championship from Dave Castro, I was excited. Weightlifting is one of the four sports I have seriously and specifically trained for and competed in (the others being track and field, football and CrossFit).

My first question to Dave was, “How can we be sure that the event is competed in by CrossFitters and weightlifters don’t come in and dominate?” Dave wasn’t sure at the time but eventually came up with an AMRAP triplet where reps completed would be added to your snatch and clean-and-jerk total to produce a final score.

This seemed like a great idea to me until I found out an old foe of mine (double-unders) would be part of the triplet. The double-under addition made me seriously think about not competing, but I decided I had plenty of time to become competent at them and go and give it the old college try. I knew I’d regret not competing at this inaugural event, so it was time to develop a plan! 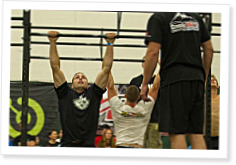 The squat snatch is more efficient—there’s no doubt about that. But for some people, particularly those with flexibility, agility and balance issues, the split snatch… Continue Reading

Developing the Behind-the-Neck Split Jerk With Coach B: Part 3

By Mike Burgener with Dave Lipson

Working his magic on Dave Lipson, Coach Mike Burgener refines the split jerk by breaking down the movement and rebuilding it.

8 Comments on “Planning for a Win”

Josh, Congratulations on your success at the CrossFit USAW Open, and thanks for sharing your program with us. It is always cool to see programming prepared for a purpose by one of the best. It was good talking with you at the Level 1 test. Take care down there and come back and visit Moreno Valley anytime:)

Josh you gotta call Savon or again faster and have a video of you working with the navy made, primo journal content right there!

Josh is an amazing, disciplined athlete and it showed at the USAW/CF event. Solid work, bro.

Josh, great article. Always impressed by your performances. True inspiration to the community

Josh has always been a true hero of mine. Over the years, Josh has taught me a great deal about what it really means to have a "work ethic". Josh works harder than any other athlete I know, and the results always speak for themselves. Josh, thanks for always being a great inspiration to the CrossFit community.

Josh you are awesome. I great crossfit hero of mine and I always look to you for inspiration. Congrats on the win and thx for you and CoachB for the insight on your programming.

very impressive work. i really appreciate this article. once again, testimony as to why i pay my annual membership fees. top-notch info from a top-notch facility/web-site/group of people.

please keep up the good work. your programming is dynamic yet sound in the foundational movements. as i said earlier... impressive.

Thanks for all of the positive comments... I'm very humbled by them.