Russell Berger explains how a company called 9Line works to support wounded warriors in their fight to recover from injury.

In 2006, Juan Valentin was badly injured by an IED explosion while serving overseas. The process of his recovery gave him a unique knowledge and understanding of just how difficult it can be to go from an elite warrior to having little or no ability to train as an athlete.

“I was a very active person,” Valentin recalled, “but after I was injured, I had no training system that could allow me to stay active and healthy until I found CrossFit.”

After a medical retirement from the military, Valentin brought his own experience and love of the CrossFit program to a company called 9Line LLC. 9Line is a disabled-veteran-owned small business created for one specific purpose: to assist in the advocacy and support of our nation’s wounded Special Operations Forces warriors.

Shortly after the creation of the company, the Department of Defense issued 9Line a grant to create something truly unique. In partnership with the United States Olympic Committee Paralympic Program, Valentin developed The Wounded Warrior Athlete Program and called the team of wounded veterans he recruited “The Bionic Warriors.” 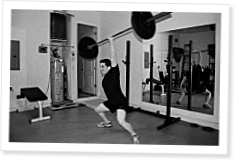 In this special episode of CrossFit Radio, Coach Glassman, Mark Rippetoe, Lon Kilgore, Robb Wolf, and Andy Stumpf come to the table with facts and science to combat the attack waged against CrossFit, its… Continue Reading

That was very inspiring. Thank you.

No more bitchin' about how sore I am anymore...

All these guys are incredible.

Proud to be a Marine.

Great article, Russell. Wounded warriors are always inspiring. I was once in my garage on base on Camp Pendleton when I heard a rhythmic, repetitive squeaky noise. I looked to the side and one of my neighbors was running down the road--on his prosthetic leg that looked and functioned like a long metal leaf spring. Turns out he had lost it in an IED. That will make you re-evaluate a lot of things.

Very inspiring, Mr. Berger. Thank you for writing an article which highlights these great heroes.