Coach Mike Burgener breaks down the key points of Chad Vaughn’s lifts at the CrossFit-USAW Open.

Chad Vaughn opened the snatch competition at the CrossFit-USAW Open with 132 kg. He made the weight easily, which isn’t that surprising considering Vaughn is an Olympian who was lifting only days after finishing 20th in the 77-kg class at the World Weightlifting Championships in Antalya, Turkey.

Vaughn went on to put on a show at the Cheyenne Mountain Resort, making every lift on his way to a 313 total. In this new series, Coach Mike Burgener explains how Vaughn got the weight overhead. 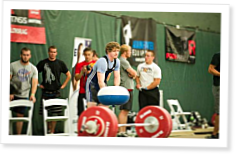 Skill Transfer Exercises for the Jerk

In this video by CrossFit By Overload, Coach Mike Burgener tells Tony Budding that every coach has to look for three components in every lift: stance, grip and position… Continue Reading