2010 CrossFit Games champion Kristan Clever has her own interpretation of the “scale as needed” rider for WODs: attempt them at the RX’d weight without considering whether it’s intended for men or women. For Clever, who dominated the 2010 Games, the next challenge is to use the RX’d weight or the men’s weight whenever it’s given.

Challenges are something an elite performer like Clever must find and face to develop her performance further, and after discovering CrossFit, working out alone just wasn’t challenging enough for the SoCal athlete. According to Clever, “I don’t think you push as hard on your own as much as you try to, as much as you want to. As much as you imagine there’s people there next to you, it’s not the same.”

After joining an affiliate, she progressed by working out alongside other athletes at Valley CrossFit. Find out how Clever motivates herself through competition and just how hard each workout is—even for the Games winner. 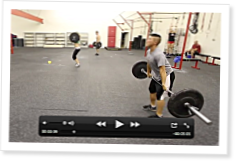 In this video shot after the most recent Games, the 2010 champion talks about what drove her to compete. With confidence in… Continue Reading

All Over the Map: Froning and Kinney

The Road to the 09 Games — Jocelyn

With only two weeks until the first barbell flies at the 2010 CrossFit Games, Ian Wittenber is still cranking his way across the country, interviewing as many individual athletes as possible along… Continue Reading

Jocelyn Secondi is the co-owner of CrossFit Milford with Jason Leydon. They are getting married on September 18, 2009, but her next big event is the Northeast Regional Qualifier for the… Continue Reading

8 Comments on “Perspective and Insight ”

She is an awesome champion. Great video

That shot of all the ladies of Valley CrossFit doing "Linda" together--what an inspiration!

And ditto to what Pat said.

Kristan, your humility is definitely something for people to emulate. Keep being awesome.

such a great attitude...awesome athlete

Kristan you have set the bar very high and you keep pushing the bar higher -you are so fun to follow-thanks!

I am a HUGE Kristen Clever fan. I've had the pleasure and the privilege to chat with Kristen about regular life stuff. What a neat woman! I am so, SO pleased that she is not only part of our community and our champion, but that she so obviously LIKES being part of the greater community.

What a cool thing it's been to meet you, get to know you, Kristen. Thank you.