Skin Infections and the CrossFit Athlete

Ripped hands and bloody shins give bacteria a way into your body. Dr. Mike Ray explains what’s going on and offers his tips on how you can avoid nasty infections.

The pull-up bar was a larger diameter than she was used to, but she wasn’t going to slow down for that—especially not visiting a new gym. During the last round of pull-ups, she was vaguely aware that she had injured her hands, but she didn’t really look at them until the workout was over. Even then, she didn’t think much of it; she’d torn much worse plenty of times before, and now she just had blisters on both palms, though the one on the right did open up and drain a little. She squeezed out a little clear fluid and left it at that. Besides, her doctor had just convinced her to update her tetanus immunization—something she had been reluctant to do.

For the first day, she wasn’t too worried. The blister on her left hand never did drain, though the one on the right looked worse within a few hours. Then, her right hand started to hurt more. She had, of course, continued to work out, so she figured she had overdone it on an already-vulnerable area. But was the skin near the blister on her right hand becoming a little red? It was getting so she couldn’t hold onto a bar.

That night, her right hand was really hurting. The burning made it hard to sleep, and she woke up every few hours. Checking her palm under the bathroom light, she could see it was definitely redder. Even though the blister had drained, there still seemed to be some fluid, maybe under another layer. It was getting really tender to the touch. Something was not right. In the morning, she would have to get it looked at. 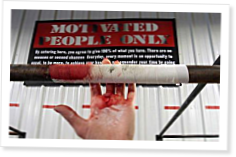 A Language to Diagnose With Kelly Starrett: Part 3

Join Kelly Starrett, owner of San Francisco CrossFit and creator of MobilityWOD, as he teaches coaches and their athletes how to diagnose dysfunction.

Make Your Life Better: Get Horizontal

14 Comments on “Skin Infections and the CrossFit Athlete ”

I am a shareholder in a company that produces an anti-microbial solution. I am checking with the staff , we have a handrinse that is not alcohol based and very very effective and long lasting . I want to get their input on treating the gear and the athletes.
The name of the product line is Goldshield and we have not really sold it for athletes just focused on hospitals and labs .
I will see if we can make it available . All staph and MRSA infections are very dangerous .
The is an marked increase in these infections and I think this article is spot on .
PLEASE be careful use our stuff soap and water anything but tend to your body.

Very good article on a very important topic. This issue is not just a crossfit issue but one anybody can see at any gym or even at home. As a 10 year paramedic I always ask injured patients when their last tetnus shot was administered. If you do not know then please contact your doctor and find out.
I like many crossfitters will show off my injuries thinking that it is pretty cool or even a badge of courage. Let me ask this ,Is there anything cool though having mrsa?

great, and well needed article.
We have hand sanitizer in our place and I wipe down pull-up bars and o-bars regularly. The floors of course are in need of a good bleaching, but...

Great article Mike. This is definitely something that needed to be addressed.
I tear my hands all the time and always wash/disinfect them after however last year I got a nasty rope burn from a rope and didn't wash it immediately-totally got infected. It pretty much sucked!!

Meant to say rope burn on my shin, not from a rope!! Need sleep!

Great article Dr. Ray. I had the MRSA infection this summer in my hand. The infection started out under the skin after my hand tear had healed. I noticed it was starting to hurt when I did pull-ups and within a few days it started to swell up and hurt more. On my first trip to the er the doctor told me it was a insect bite and gave me some oral antibiotics which didn't do anything. Second trip to the er they gave me some antibiotic shots but that didn't help either. Third trip to the er and my hand started to look like a boxing glove with swelling extending up my arm and in constant pain they admitted me. The first day in the hospital they started giving me intravenous antibiotics but my hand continued to get worse. A surgeon came in the second day and opened up my hand to let the infection drain. He squeezed about a cup of bloody puss out of my hand. The second intravenous antibiotic didn't work either but the third one which was vancomycin did. The infection immediately started to go down and over the next few days kept getting better. It took a few weeks for my hand to get back to normal. Being a crossfitter naturally I believe I am impervious to things like infections, germs and colds. Tearing my hands often and not having any problems for years reinforced that idea. So I just didn't worry about them or take care of the wounds like I should have. So now I am really careful about hand tears, any pull-ups over 100 and Ill use gymnast straps or wrap my hands. I think the most important part is how you take care of the wound when you get one. Like Dr. Ray says in the article, clean the wound thoroughly and bandage it. Also if you have a wound that starts getting red and puffy get it checked out immediately and have them do a blood culture check for MRSA.Its better to be safe than sorry.

Excellent article by Dr Ray and I agree and support his strong advice on care and prevention of hand injuries.
May I make two points -
I work in Brisbane Australia; my first drug of choice in these hand infections is oral flucloxacillin which is very effective against most staph; and daily inspection of the hand until resolution is achieved.
The other point is that I always use training gloves for pullups (where there is a torsion force involved) and I have never had a blister or infection. Perhaps it is time for the crossfit community to look seriously at this type of protection

I second the rope burn infection! It has caused a few nasty staph infections. Athletes don't think about cleaning it because there isn't any obvious tear in the skin, but just the burn is enough to allow an infection to fester. Now it is mandatory in our gym to wash your hands and ankles after climbing the rope.

Thanks for the article, and the reminder about the vaccines.

because I don't recall my last booster, after reading the article I scheduled a tdap booster first week of 2011 :) not too mention I just biffed on the plyo-box busting my knee :-/

Yep, good article. Personal story: a few years ago I wore some shoes during a squash tournament that were a bit too small. Got blisters on a few toes. One tiny one on my little toe got infected. Two days after the tourney my toe hurt like hell and I couldn't sleep cos of a fever. Went to Doc. Doc points out the red lines running up my calves and legs (which for some reason I hadn't noticed...duh) and presses on my inguinal lymph node. I yelp. He says "you gotta go to the ER for emerg IV antibiotics". I had to go back to emerg every ~6 hours with an IV for ~48 hours. All good after a few days. I've never looked at blisters & "minor" skin wounds the same way after that. Great learning experience. Do what the doc says in the article. Nuff said.

There was a big push about a year or two ago about educating about MRSA in gymnastic gyms in the US. We haven't ever had a case in any gym I've been in, but we always clean a bar or area if a kid/coach bleeds on equipment or the floor.

At the same time was when a lot of gyms started putting in alcohol based hand sanitizers in gyms as well to cut down on germs and stuff besides the cold and flu seasons.

What kind of doctor are you?

What happened after your burn got infected? I'm nervous I am dealing with this now and just noticed yesterday my ankle and foot are swollen.
Thanks!

Great Article. As the owner of BRC Infection Control Solutions I have been doing my best to raise awareness of why and how crossfitters should be protecting themselves from this serious risk. Additionally, I am working with boxes to provide the disinfection and cleaning services and provide resources for members to protect themselves.