1:50 Justin relayed information about the sectionals that can be found on the Games site. He read comments that were both for and against the new format, then gave his own thoughts on the matter.

9:55 Leah Polaski was recently featured on the Games site as one to watch out for in the upcoming competition season. She came on the show to talk about her diet, her training and how a tiebreaker kept her from qualifying for the Games last year. Polaski is carefully considering her programming and training volume as she prepares for the upcoming competition season, and she echoed Austin Malleolo’s sentiments from last week by saying she believes it’s important to enter as many competitions as possible.

39:25 CrossFit Omaha placed second in last year’s Affiliate Cup competition, and co-owner Ricky Frausto came on the show to talk about how he prepares a team to compete. He gave his thoughts on last year’s Games and described how CrossFit Omaha prepares those members who want to compete as opposed to those who are CrossFitting for other reasons. Ricky also explained a business plan he’s using to combat this slow time of the year. 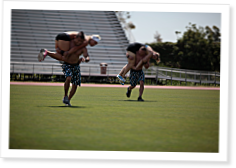 On Episode 336 of CrossFit Radio, host Justin Judkins interviewed CrossFit Games qualifier Will Moorad. This episode was webcast on June 25, 2014.