1:40 After helping veterans at Walter Reed Medical Center and being honorably discharged from the military, Rick Martinez founded Alamo CrossFit and set out to prevent people from getting sick instead of helping them afterward. Rick came on the show to talk about a blog he writes to help affiliate owners be successful. He detailed the first question a prospective affiliate owner needs to ask him- or herself. He also outlined specific things that would benefit affiliate owners, things he has learned through trial and error. Finally, he talked about how important it is for trainers to share knowledge about nutrition.

23:27 Emily Beers of CrossFit Vancouver created a short documentary on CrossFitters who narrowly missed qualifying for a CrossFit competition. She looks at the emotional costs of failing to qualify and follows two Canadians as they prepare to never let that happen again.

32:10 FunBobby Kwasny and his wife Andrea own CrossFit Subzero in Thunder Bay, Ont. Their Feb. 5 Intergalactic Throwdown was a three-WOD cross-Canada competition conducted online in much the same format as the upcoming open competition for this year’s CrossFit Games. FunBobby came on the show to explain how and why he put the event together and said it was great to have up-and-comers throwing down with well-known CrossFit competitors regardless of geography. He also gave a primer on some Great White North competitors to watch out for in the upcoming season. 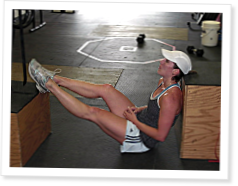 On Episode 321 of CrossFit Radio, host Justin Judkins interviewed both ladies that will face off against each other for Open Announcement 14.3 in New Orleans… Continue Reading