While there, cameras caught Terry Dickman, the fifth-place finisher from the 2010 CrossFit Games masters division and part owner of CrossFit Excel. He was competing at the powerlifting event to try something new.

“I thought it would actually help my CrossFit training, working on strength,” he says. “My goal is to try to get some PRs today.”

Dickman went on to share his Games experiences and how he found CrossFit.

“I was a little bit overweight, actually a lot overweight, you know, and looking for something that wasn’t so boring. After a month of doing (CrossFit), I was totally hooked and I’ve been doing it ever since,” he says.

In just two years, he became a Games competitor.

“That kind of tells you about the program or CrossFit, what it can do for somebody,” Dickman says. 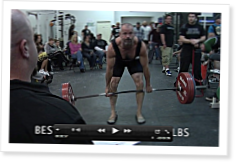 Cleans, Burpees, Reflections on the Games

One CrossFit Games champion has inspired another.

Join CrossFit Fort Vancouver, winner of this year’s Affiliate Cup, as team members recall their performance at the 2010 CrossFit Games.

The Fort V experience at the Games started out… Continue Reading

“The atmosphere of a sectional or regional greatly prepares you for an event like the Games because the Games is just physically, you know, physically I can do three or four WODs a… Continue Reading

10 Comments on “A CrossFit Transformation”

CrossFit is awesome !!! Every day new heroes emerge they are of all ages from different places with different stories and the common thread of CrossFit.
"Got to love it".
Kudo's to Terry for his accomplishments and for bringing the Masters WOD as an addition to the amazing community that already exists.
Terry you are on my list of people I am grateful to for their CrossFit Contributions.

ALL the best at the Games and Thanks for those Masters WOD's.

terry
you are an example to all of us masters across the globe
see u at the games !

Love the masters stories and look forward to more!

Terry - Hoping to stop by and meet you and the crew at Excel next time I come over to see friends and family. Always end up passing through Manteca, now I have a reason to stop and sweat a bit. ;-)

Terry! So excited to see you on the main page! I'll be rooting for you again this year in the Masters!

By the beard of zeus! Looks like a good time.

Those comments don't go both ways.

You can't say powerlifters aren't fit enough, when their goal is a big total. CF's fitness goals simply apply better to the masses. It encompasses what most people want. If you are training for a sport or survival, your goals may have certain requirements. But if you are average Joe or Jane off the street, most people want to get 'a bit' stronger (but not 'too big') and be 'fitter' and healthier, but also look more muscular/slim/toned/whatever in their arms, abs and/or butt. Crossfit does this really well...AND so much more.

Also, I think Crossfit needs to learn some Powerlifting lessons on growing a great beard. Chuck Norris, Mr T and Kimbo Slice would be proud.

I agree with Matt.

You have to understand the goal of each sport. CrossFit wants to be fit across the entire spectrum. Powerlifting is a specialization.

When a powerlifter says CrossFitters aren't strong enough what they are saying, if they are reasonably bright, is that most CrossFitters CAN benefit in their performance from an increase in absolute strength.

I love these stories.