Coach Mike Burgener analyzes Josh Everett’s use of the split technique in the snatch and clean and jerk.

One of the original CrossFit stars, Josh Everett is a great athlete who’s especially good at the Olympic lifts. At the CrossFit-USAW Open in Colorado Springs, Colo., Everett was able to showcase his CrossFit talents and his Oly skills on his way to victory in the 85-kilogram class.

Everett uses the split style for snatches and cleans, and in Part 4 of this series, Coach Mike Burgener breaks down Everett’s technique in these rarer forms of the lift. 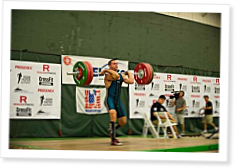 The Burgener Files: 1 - The Warmup

Coach Mike Burgener has a special gift for simplifying the Olympic lifts—especially for beginners.

“Ninety percent of all missed lifts are attributed to the feet,” Burgener says to a… Continue Reading

In this first video of this series from … Continue Reading

Coach B. and Josh! Hell yeah!

Great analysis. It's good to see a horizontal line in the pics (the banners), so you can really see the pushing under the bar.

Love reading Coach B's insights into Oly lifting but thought in this article he might have had some commentary on why an athlete would choose to do a split snatch and split clean when the majority of lifters are doing squats to get under the weight.

kevin, josh and i worked for close to 2 years trying to develop his snatch using the sqt style. his best was i think 95 kg. we both decided to give the less efficient, old school split style a shot. within 4 wks his snatch was 122 kg. josh decided that even though he could clean using the squat style that he should just go hook, line, and sinker using the split. make no bones about it the squat style is much more efficient, effective than the split. the lack of mobility in our older generation (geezers) (me) use the split style.

Thanks for sharing the story, Coach. While the splitting technique may not be the most efficient method, man does it look cool in the snatch especially when performed by one of the original CF Beasts in Josh Everett. As a newer crossfitter and soon to be 46, I can relate to some lack of mobility and flexibility (really need to start incorporating those MWODS). I have started experimenting with the split snatch and I like it alot.