3:20 Sarah Wilson came on the show to talk about the Heraean Games she’s hosting. The competition will feature female CrossFitters only, and she explained that her motivation was to provide a format where the strong, competitive women of CrossFit could compete in the spotlight.

14:50 Kevin Montoya is the owner of CrossFit FlexGym. He took ownership of a conventional gym and infused it with CrossFit, and he talked about running a gym that’s a CrossFit box and a traditional fitness facility. Montoya also talked about how he came to be featured frequently on the main site demonstrating the daily WOD, and he described his athletic background. Montoya is in the process of recovering from a bout with rhabdo and explained how it happened and how he’s dealing with it.

41:10 Camille Leblanc-Bazinet won the hearts of CrossFitters around the world when she came into the 2010 CrossFit Games virtually unknown and left with a ninth-place finish. She came on the show to talk about her training and diet, as well as the mental preparation she puts into each WOD: she has established rules for her workouts that she never lets herself break. CLB also talked about moving to Boston and training with Dave Lipson and the people at Reebok CrossFit One, and the French Canadian explained how she’s preparing for competition this year. 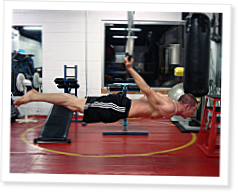 On Episode 180 of CrossFit Radio, host Justin Judkins interviewed Corey Pitsillidi, who was the media director for the Australia Regional. Corey has used CrossFit to overcome… Continue Reading

Sitting over the pond in Norway doing school work while listening to Crossfit radio and dreaming about opening my (for now) imaginary affiliate. Very cool and relaxing show.

Wow... thoughts and karma going out to Kevin... that sucks so bad. Hopefully it all works out for him, and hopefully he doesn't have to sit out a year of games competition. Though, given how hungry that would make him, woe unto anyone stuck competing against him NEXT year! :D


JJ, sorry to be one of the guys who let you down on the challenge. :S The few days I've been able to get the space and gear to do the workout, I haven't been able to get anyone to film me (good thing I'm not planning on competing in the Games this year...maybe I'll be up against Kevin next year!) If the offer is still open, I'll try and get something uploaded for you ASAP. Those rings are definitely a killer prize!


Thanks for all you do, and keep the great interviews coming. Definitely fun to hear Camille and Dave bickering about the quality of his reps!