3:40 Keetron Breece has been an affiliate owner for the past four years. He shared his story about turning his life around and explained how CrossFit played a significant role in that U-turn. Reflecting, he talked about the early days of CrossFit and attending seminars with Coach Glassman and Greg Amundson. Keetron explained how he markets his affiliate now and what he’s doing to bring new athletes along in their pursuit of elite fitness. He talked about how his on-ramp program evolved, and how he has created a great community in his box. Finally, he shared his results from workout 11.1 in the Open.

32:50 Justin played a documentary in which Emily Beers surveyed CrossFit women about the peaks and valleys of dating as a single CrossFitter.

39:45 Annie Fowler completed the first WOD of the Open Competition by nailing 223 reps of double-unders and snatches—while in her third trimester of pregnancy. She spoke about CrossFitting during pregnancy and how she has hit several PRs in the last eight months. She explained why she decided not to let her pregnancy slow her down and described how she has had to taper some movements and weights with advice from her doctor. Annie also talked about her diet and how it has changed now that she’s eating for two. 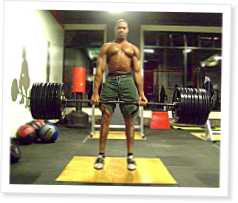 I'm almost not surprised that Annie started hitting some PRs during pregnancy. When my wife was pregnant, we were doing a TON of reading on the processes, physics and chemistry of pregnancy, and long story short: There's a lot of awesome stuff going on in a woman's hormones during those months, especially if she's following an even halfway decent diet (and lets face it, a PaleoZoner's bad days/weeks/months still look like the average American's strict diet...), which should have a massively positive effect on her performance, all other variables being equal.

Great interviews this week, JJ. Thanks!!

This is Natalie (Brad's wife). I especially enjoyed this episode, as I too am pregnant due one day before Annie, and my experience so far has been very similar to Annie's. I found the first trimester to be quite treterous with nausea and food aversions, but now well into the third I have somewhat given up on the clean eating days of pre-pregnancy. I do my best to include fruit and veggies and eat good meat when I can stand the smell, texture and appearance. But all I really want to eat is oranges, kiwis and rootbeer. I've been wodding continuously through my pregnancy as well, with additional rest days thrown in, and lighter loads. I've also hit a few PRs in my 6 month I hit Grace 4:04 and in my 7th I got a bench press PR. I did the open wod twice, with 217, and 237. But I must confess it was all cleans as the snatch position from the ground is quite akward. I've always kept the motto to listen to my body, I haven't had to quit a wod yet but I have reverted to using bands for pullups, the day I went up and cranked my chin on the bar I knew I was actually heavier than my brain thought I was and as long as I could still do them with the band I could still perform the wod. It's really great to hear another's experience as there really aren't that many stories for prego crossfitters out there, I'd like to hear how Tanya's experience is going. Especially the recovery after birth! THanks Justin!