According to Cusson, CrossFit provides more than a physical benefit. It provides a mental edge. He says he became a fighter and a skydiver to conquer his fears, and he believes CrossFit provides him with the same stimulus. While most of his workouts are standard CrossFit fare, he also asks CrossFit New England owner Ben Bergeron to program fight WODs for him in preparation for the cage.

Cusson says that a CrossFit gym differs from any other gym.

“You come into here and there’s no need for, like, attitudes because at the end of the class everyone’s pretty much going to be on the floor sweating and gasping for air, so you respect everybody,” he says.

In fact, Cusson used to train at a gym five minutes from his house but now embraces a longer commute.

The UFC Fan Expo in Toronto, Ont., will be home to a CrossFit competition April 29-30. Register for the competition here, buy tickets to watch here and e-mail questions to games@crossfit.com. 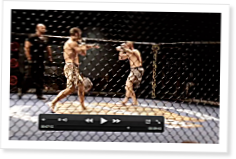 From the CrossFit Games to Pregnancy

With some of CrossFit’s top athletes in Lake Tahoe, Calif., for the Rogue Vs. Again Faster Throwdown, it was a great opportunity to put the athletes into a room and get them talking with the cameras… Continue Reading

Valerie MacKenzie Voboril bounced back after a disappointing finish at the 2009 CrossFit Games to come in third in 2010.

An Interview with Jason Khalipa - Part 3

All Over the Map: Smith, Kepler, Cardella and Sharratt

Jason Khalipa of CrossFit Santa Clara in Santa Clara, CA won the 2008 CrossFit Games. Tony Budding took advantage of his recent visit to get to know him a little… Continue Reading

With just one week before the kickoff of the 2010 Games, Ian Wittenber is closing in on the West Coast, chugging along in his car and catching interviews with the athletes headed to… Continue Reading

14 Comments on “The Mental Fight”

BEAST!
Makes me wanna go back to MMA.

This may be one of the best CrossFit Journal athlete video's I have ever seen. Eric - thank you for your service and for setting such an amazing example for other LEO's to follow. If there was ever anyone who could honestly claim to "Walk the Walk and Talk the Talk" it is YOU.

Eric is one of the nicest guys at CFNE. It's great to see him profiled here!

Congratulations on a great video. It's great to see you featured on the Journal.

For those people who don't know Eric, he's a true gentleman and an outstanding SWAT officer. He's a credit to the law enforcement community.

I look forward to seeing you fight in the big show.

Wow what a great guy. Inspiring.

Way to use Crossfit to your advantage in your MMA career. Thanks for sharing your story and that cool fight footage. Big Dan (referee) made you look small but you fought HUGE! Your level of fitness was obviously better than your opponent. Awesome takedown from the clinch and great GNP for the finish. Very impressive.

great video. i loved it a lot. there are no crossfit gyms in Croatia but there are ppl that do crossfit. luckily there are a lot of old school gyms with oly platforms so we make do...what i wanted to say is that i totally agree with Eric. I wrestle a lot and do grappling and often it is with guys that weigh more than me. Some even up to 15kg (7 pounds i think)and there is no greater confidence building feeling than knowing that although he is a bit stronger he cannot hurt you and that you are only waiting for him to gas out. the feeling that you can outlast anyone in the gym makes you fearless. i love it. that is why i do crossfit. i do not want to be afraid of anyone. as my dad once said about fighting:" it´s ok to be scared before a fight.it is definetly ok to be scared after the fight but never during the fight." i hope it makes sense. It makes perfect sense to me. stay strong and walk tall.

Well Done Eric! You're a great friend, teammate, and competitor and we're lucky to have you at CFNE. It's always an honor to train with you, and a blast to watch you compete. You're a class act, and it's great to see this featured here. See you at the box!

great video! Eric is a total BA. Keep up the good fight both in the cage and out.

Would not want to get in a fight with that guy...holy hell! Inspiring too!

Thank you everyone for your kind words. Patrick Cummings from Again Faster is not only one of the nicest guys but he is amazing at what he does.

I would also like to mention my Shihan, Jason Delucia who was left out. He is a true Master and friend. He makes it all possible. Thank you Shihan Jason!