Bill Starr offers up some drills for blasting past plateaus on your jerk.

In the last two decades, a large number of strength coaches and a smattering of personal trainers came to the conclusion that by inserting a high-skill lift in their athletes’ programs, the athletes became quicker, more coordinated and overall stronger than before. In addition, the newly acquired strength transferred directly to any sport.

Those with a background in Olympic lifting already knew this, and some of us had been urging athletes to include at least one of those lifts in their routines for many years. The problem was, however, that the strength coaches and personal trainers didn’t know how to perform full snatches, full cleans or jerks, so they shied away from them in fear of doing more harm that good. That’s understandable, but at the same time they were neglecting their athletes. What they needed to do was find someone who knew how to do the Olympic movements and have that person teach them how to do the lifts.

At the same time, I believe just about anyone can learn very quickly how to do a jerk. It’s a natural move, and I have taught youngsters how to do it correctly in a matter of minutes. Teaching someone the jerk is rather simple, but jerking a heavy weight is a different matter altogether. This is why I hold off on having an athlete do jerks until I’m sure he has developed a sufficient amount of strength in his upper body to be able to jerk and hold a demanding poundage. After that, I put him or her on a steady diet of the quick lift. 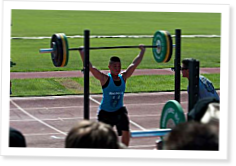 Bill Starr coached at the 1968 Olympics in Mexico City, the 1970 World Olympic Weightlifting World Championship in Columbus, Ohio, and the 1975 World Powerlifting Championships in… Continue Reading

Learning How to Do Full Cleans

Bill Starr explains how to incorporate isontonics and isometrics into your strength program.

The isometric concept was the brainchild of Dr. John Ziegler, a general practitioner from Olney, Md., who… Continue Reading

Full cleans can get complicated, but Bill Starr simplifies the movement into a power clean and a front squat. Get comfortable with the movements, then start refining the clean… Continue Reading

Great article! And really good drills he suggested. I will use some of them. I agree that jerks are a great skill transfer exercise for sports because of the strength speed required.