The Position: Part 2&#8212;The Burpee by Kelly Starrett and Carl Paoli - CrossFit Journal

This video series provides a fresh look at skill-transfer exercises and midline stability, combining the powers of Kelly Starrett and gymnast Carl Paoli. Both San Francisco CrossFit coaches add their expertise to refine basic CrossFit movements with the aim of improving power output.

In Part 2, the burpee is refined as a skill-transfer exercise.

“Here is another classic CrossFit exercise that ends up being a fantastic conditioning tool,” Starrett says.

The straight jump of the burpee demonstrates “The Position,” also called “neutral” or the “hollow-body position.” As a precursor to developing a correct burpee, Paoli has his athletes perform a push-up to a straight jump to avoid the body flop and the broken, over-extended jumping position most commonly associated with the burpee. The straight jump translates into a well-integrated box jump.

“We’re really interested in how to reinforce an open hip and neutral-spine combo, and so all of these kind of throw-away, traditionally-thought-of-as-conditioning exercises become very important potentiators of neutral spine, powerful spine,” Starrett says. 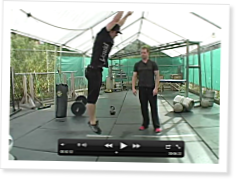 There are 20 comments on this article. Login to add your own.

The Position: Part 1—The Double-Under

The Position: Part 3—The Push-Up

The Position: Part 7—The Ring Dip

20 Comments on “The Position: Part 2—The Burpee”

When is Crossfit Hq going to start letting Carl do a Ninja Cert, taught by Carl? I will be the first to sign up when they do, he is an awesome athlete and an even better teacher!

So awesome to hear this stuff from CF.com! Stay neutral baby!

This is really helpful for a newbie like me. The broken position or belly to the floor is exactly what I do, esp. when gassed (let everything go to shit and that will save energy? where does THAT thinking come from?). Now I know to keep the position and will try to feel that alignment in my body. Thanks guys!

As Kelly and Carl say chase quality and here is 1 more way to achieve it.

Tim, I totally second that idea!

Great video! The dreaded bad form burpee rears its ugly head but carl the ninja and kelly the mobility wizard slay the beast in its tracks. MORE PLEASE! Stay Neutral San Francisco should be their sign off.

Carl needs to just do a cert on being "The Man." I would take the cert from him!

Do you think this should be the new standard for all burpees and box jumps? I just did your gymnastic wod with the dips and box jumps and it definitely feels better doing them while in the hollow position. But I obviously wasn't able to do them as fast as i normally would.

Almost all of the people we train are high school athletes. So i'm wondering if it would be more beneficial for them to focus more on work capacity (speed) instead of keeping the hollow position during movements like the burpee, box jump, and double under (and whatever movements you show next)? My reasoning behind this is that none of them are actually participate in competitive gymnastics. So does this carry over more directly towards gymnastics or every sport?

We were considering mixing it up. Some workouts we would require strict hollow burpees, box jumps, etc., and others we would go for speed. Any input would be apprecited. Thanks.

Everything we do has a purpose. CF's purpose is all about increasing your work capacity and overall fitness. It is my belief that being able to balance technique and intensity is what makes your fitness program applicable to whatever it is you want to do. Keep in mind there is not only one path to improved overall fitness, CFGames champion, Olympic gold medalist or just badass human being...what's your purpose and what path do you take?

Great information I definitely want to start focusing more attention on hollow body form within my movements. keep up the great work guys.

One question - for the box jump, as the box gets higher will this change your form at all or is it as simple as just driving the knees up?

As much as I agree with fixing ugly positions increasing work capacity, I have to question some things. Firstly to burpee like that would in many competitions, or at least the few that I've participated in would be a no rep. And the height of the jump seems to be higher and slower. I'm not saying that there is anything wrong with it but in terms of the sport/competition side, certain things are done for speed like throwing your arms hard in a box jump, and floping fast to the floor instead of wasting energy to do a slower push up/burpee. I wonder if there could be a happy medium to increase efficiency but still keep the competitive speed style.

Carl and Kstar at it again...straight up being ninjas as expected.

Not that I don't value the information being presented, but that Carl guy has a smug tone of voice when he is coaching/lecturing.

What I gather from this video is that consistency in technique and control of movement must come before intensity. I (along with Chris Sinagoga above) train a group of high school athletes and mom's but particularly the high schoolers that we put on a 90/10 split. 90 percent of the time they need to go at a 90 percent intensity clip with the focus on form versus fast and 10 percent of the time we let them throwdown with all they got in the tank. Being strict with form allows them a larger reservoir to pull from when they need to go all out plus it is more efficient to maintain optimal technique at the beginnning for as long as you can versus doing whatever it takes to move the weight with the end result being super sloppy form in the end. Just like sports the athlete needs to be coached and not allowed to blow his gusto all in the first period. As trainers we need to instill that calmness under the face of competitiveness. Your shot or swing should be the same at the beginning as it is in the end just like your clean and jerk should be the same at the beginnning as it is in the end.

With regards to the burpee, I feel that Carl and Kelly are just introducing a more functional version. First, burpees in general are sloppy but why so? why do we as trainers allow speed versus technique in this case to prevail? The burpee demonstrated by Carl has better positioning from start to middle to finsh (and kind reminds me of someone going for a rebound) versus the speed burpee with the clap behind the head which gives the impression of a false open hip by "breaking" the low back and acts as a sort of parlor trick. The hands in front of the body versus behind the head is obviously more functional with regards to sports (add in a catching component to the burpee and see how successful someone is with their hands behind their head). Second the height and end postion are more revelant to sports also. After falling down the goal should be to get vertical again, the speed burpee often skips this final action leaving the transgressor in a sort of vertical-horizontal battle. Which burpee comes closer to resembling triple extension?

But ultimately I think if you treat your clients as athletes it comes down to body awareness and specifically body positioning. The introduction of various nuisances will help them achieve a higher level of mastery in this regards. Just like the variations of the pull-up, the burpee has its own subtleties but just like the pull-up should be built on the dead hang (which we often overskip on our way to the kipping and butterfly versions) maybe the burpee should be built on a more controlled version also.

Kelly/Carl, do you advocate this body positioning whilst performing compound exercises such as the deadlift, squat etc?

Thanks and hope you're both well.

I've taken both the mobility cert and Carl's Freestyle/Gymnastics Seminar. Both of these super star coaches are top notch. Not only are they great coaches, but they are some of the nicest people in the CF community. I spent a ton of time talking to them during the lunch breaks. I know it's your opinion and Carl may have sounded smug to you, but in reality, he is top notch.

Is there a part III
I cant find it and I love this concept???

indeed this method seems slow you down in starting,but after a little work on basic will improve the speed incredibly.