You can call him Sir Charles, The Round Mound of Rebound, gold medalist, NBA MVP and hall of famer, and now you can call Charles Barkley a CrossFitter.

In Part 2 of this series, the legendary NBA player and TNT personality talks about how pro basketball is more than a physical test.

“No matter how hard you train, you can’t prepare for the game. … All you have to do is be the best you possibly can physically, and then, late in games mainly, that’s when your mental toughness takes over—because everybody’s tired.”

According to Barkley, it’s mental toughness that separates the good from the great, and it’s an attitude that will no doubt serve Barkley well as he reclaims his fitness at CrossFit North Atlanta.

And does the outspoken superstar fit into the CrossFit box? HQ flowmaster Chuck Carswell thinks so.

“He’s not a guy who has just come in the facility to CrossFit. He really is a CrossFitter to the core,” Carswell says. “He’s exactly what we represent. He’s got a very sensitive bullshit meter, and because of that he’s found a facility he can train in and be himself.”

Additional reading: Coaching the Mental Side of CrossFit by Greg Amundson, published July 7, 2010. 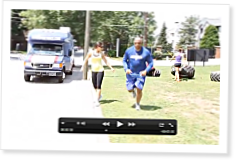 By Austin Malleolo and James Hobart

You can call him Sir Charles, The Round Mound of Rebound, Olympic gold medalist, NBA MVP or hall of famer, and now you can call Charles Barkley a CrossFitter.

After a dominant pro… Continue Reading

Got your PaleoKits, fish oil and broccoli ready for another road trip? On the East Coast, 2010 Games competitors Austin Malleolo and James Hobart tour the seaboard in search of… Continue Reading

By Dawn Fletcher and Miranda Oldroyd

“Just show up” was the advice given to Sue Pepe by her son-in-law. After two weeks of CrossFit, she was at a crossroads of whether to continue or give up. Pepe decided to challenge… Continue Reading

“I think we defeat ourselves sometimes mentally before we even hear ‘3, 2, 1 go!’ And just learning how to identify the stuff and get better would make a huge difference,” says HQ Seminar Staff… Continue Reading

Good for Charles Barkley. Getting back in shape is the most important thing he can do for himself at this stage of his life, and Crossfit is the best way for him to do that.

I love his thoughts on how the greatest athletes aren't cocky, they're confident in themselves because they have to be. It makes so much sense.

Dead on, ASwab. Charles appears to be comfortable enough in his own skin that he's not too concerned about what others will think. Great addition to our community. Welcome, Mr. Barkley. Hope we get to see you out and about at community events, but more importantly, hope you continue to progress toward your goals... and then, like the rest of us, as you reach them, and surpass them, you set bigger and better ones.

I have motivation for you!!!!