4:45 Leah Polaski just missed qualifying for the Games last year. She vowed not to let that happen again and attacked her training over the past year with her goal as fuel. On the show, she explained what winning the regional and qualifying for the Reebok CrossFit Games mean to her. She also talked about the programming during the Open and the regional competition, as well as rest, recovery and training as the Games approach.

32:20 2008 CrossFit Games champion Jason Khalipa bested some very stiff competition at the Northern California Regional, and he came on the show to give his thoughts on the event. Khalipa is an athlete known more for his strength than his skill with body-weight movements, so he explained how he’s been working on his weaknesses and what type of things have helped him prepare for the Games this year. He talked about peaking at the right time and how he plans to do that at the Home Depot Center. Jason explained how beneficial it has been for him to train with fellow competitor Neal Maddox, and he detailed what he’ll be up to between now and the main event. 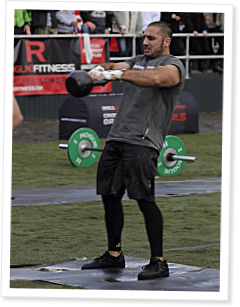 Great interviews on #175 Justin. Khalipa is a beast. Welcome back to the states. I watched an interview with you recently where you gave your projected top 5 before regionals. I would love a weekly update of those rankings (when they change) as each guy/girl jockeys for position in LA. Tony in Lake Tahoe