Andréa Maria Cecil trolls Reebok HQ during the Northeast Regional, while Hilary Achauer soaks up the sun in SoCal.

In the last weekend of regional competition, we sent Andréa Maria Cecil to the Northeast Regional at Reebok International world headquarters in Massachusetts and Hilary Achauer to Long Beach State in Southern California. Here’s what they saw on the same weekend in June, 2,600 miles apart. 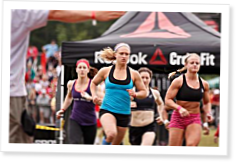 Who Will Win the Games?—Part 2

Many of us want to know what makes an elite CrossFit athlete in terms of physical attributes, and as the Reebok… Continue Reading

“The goal of this thing is two-fold: it’s to maximize participation and to find the fittest man and woman on Earth,” CrossFit founder and CEO Greg Glassman says as he discusses the significant… Continue Reading

The night before the final day of this year’s CrossFit Games, Sam Briggs had a dream.

“Wouldn’t it be so awesome if we swept the podium: one, two and three?” she asked Lindsey… Continue Reading

2 Comments on “North and South”

Dave Castro, you are officially replaced from announcing all future CrossFit Games events.

Travis Bagent is a beast! The Mikko of the MC game. He must do all future Games events. He did a great job at the Northeast Regional!!

always makes me happy to see an arrested development reference... something more of which crossfit needs.