Long-time alcoholic Christian Wood came close to death in one of three car accidents in a year and decided it was time to change. CrossFit was his answer. Andréa Maria Cecil reports.

Had his co-workers just stopped to look, they might have noticed Christian Wood drinking beer and vodka from the ice chest in the back of his truck.

Had his friends just stopped to think, they might have noticed their friend’s three car accidents in one year were no coincidence.

Alcoholism. The career construction worker concealed his addiction from his co-workers, from his friends. His wife, he said, always knew but didn’t want to face the reality of her husband being like her father.

Then it happened—the accident that almost killed him.

“(It) was head-on with a semi on a windy path, and how we did not kill each other or how I did not kill both of us, I do not know,” Wood said. “That’s what started opening my eyes. (I said to myself), ‘Dude, you need to change your life.’” 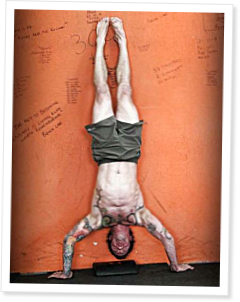 In this two-part series, Andréa Maria Cecil explores women in sports and what supporters and critics have to say about the contentious Title IX legislation. In Part 2, Cecil investigates the effects… Continue Reading

Crossfit was the natural progression for me after getting sober. I work at crossfit almost as hard as I work the 12 steps. Crossfit is like my second fellowship and it is just another amazing support system. All the best Christian! Keep coming my man!

Your truly an inspiration Christian!

I found Crossfit as a substitute for my drinking as well. The high achieved from doing these WODs are so much better than the ones from alcohol. I have been sober for 5 years and I owe it to Crossfit. Keep it up Christian!

Amazing story, I too am in recovery and I myself find that CrossFit not only works to challenge me physically but also mentally. It is so rewarding to finish a WOD that I thought wasn't possible for me. I love CrossFit! Keep up the great work Christian and God bless!

King of everything off the ground is right. check out this photo
http://peak2creektraining.wordpress.com/2011/07/14/friday-071511/
We love you Drift Wood!

Thank you for sharing. CrossFit truly is a life changing sport.