5:10 Najla Kayyem and her husband Luke own CrossFit Scottsdale. They made the trip from Arizona to Big Sky, Mont., to attend the 2011 Summer Affiliate Gathering. Najla came on the show to give listeners the lowdown from the weekend. She explained why she and Luke made the trek and what they gained from the weekend. Najla also relayed information Coach Glassman gave in his “state of the union” address.

32:30 Ben Smith recently placed third at the 2011 Reebok CrossFit Games. He came on the show to talk about his experience at the Home Depot Center. While Smith enjoyed being in the medals, he admitted his bronze wasn’t quite what he wanted. Ben talked about his training leading up to the competition and discussed how the skills and drills portion of this year’s Games played to his strengths. Finally, the young Games vet shared a little about his diet. 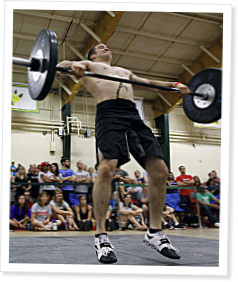 I loved the business tip section. I would love to see a business of crossfit segment added to the show more regular.