On Episode 188 of CrossFit Radio, host Justin Judkins interviewed Michael Osuna, who owns I Am CrossFit in Miami, Florida. Justin also interviewed Michael Allred, who is in Kandahar, Afghanistan, preparing for the Afghan Games that will take place Sept. 10 and 11. This episode was webcast live at 6 p.m. PDT on Wednesday, Sept. 7, 2011.

2:35 Michael Osuna owns I Am CrossFit and is involved in three other affiliates: CrossFit South Miami, CrossFit Gables and CrossFit Vida Brickell. He also created the Summer Crush Games to provide a platform for the average CrossFitter to compete and test his or her skills in the crucible of competition. He talked about how successful the event was and how he’s planning another competition titled “The Civil War Games.” There are over 600 athletes who work out at I am CrossFit, and Michael gave advice to affiliate owners based on his own trials and errors. Just like CrossFit founder and CEO Greg Glassman, Osuna has transitioned into more of a business owner than a coach/trainer, and he explained how he picks and grooms the trainers who work for him.

40:05 Michael Allred called in from Afghanistan, which is a first for CrossFit Radio. Allred is at Kandahar Airfield and has created and organized the Afghan Games, which will take place Sept. 10 and 11. Allred created the event in order to provide a stage for deployed personnel to showcase their CrossFit skills, and he talked about how several big-name sponsors have stepped up and made the event possible. He also described what it means to him and some of the other warriors to be competing on the 10th anniversary of 9/11. 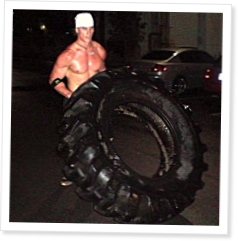 I am a college soccer player and I found CrossFit this summer. I love everything that CrossFit is and stands for. Right now I am on a bus headed to a game and I decided to get my CrossFit fix by listening to CrossFit radio. Hearing about the Afgan Games and what CrossFit means to our soldiers was so touching. Today is 9/11 and as a proud American you can't help but swell up with pride eveytime you hear stories about our brave men and women fighting to keep our country safe and free. To hear that Crossfit has touched their lives in the same way it has touched mine brought tears to my eyes. Today I am playing my game for them just like they fight everyday for me, with heart and courage. So to all our troops thank you from the bottom of my heart and good luck in the Afgan games. 3 2 1 Go.