The WOW (Workout of the Week) is Fat Jesus by CrossFit JAX:

8:40 James Hobson owns Crossfit Addiction in Georgia and has organized other affiliates in the Atlanta area into competition leagues. Hobson described how he conceptualized the idea and put it into motion. The league is starting its second season with 42 teams competing, and he’s already had to turn teams away. Hobson explained how the competitions work and discussed the benefits of being part of the league, and he also gave advice to other affiliate owners who would like to form their own leagues.

31:20 Carl Paoli is an expert on gymnastics and human movement. He gave his perspective on being in London at the time of the riots and explained how he used what he learned from Tony Blauer to keep himself safe. Carl also helped coach Annie Thorisdottir to her championship at the 2011 Reebok CrossFit Games. He described what it was like to work with her and how they determined what areas she needed to focus on. Paoli explained how the average CrossFitter can assess him- or herself and target weaknesses. Finally, the coach talked about his website GymnasticsWOD.com and how it can benefit CrossFitters. 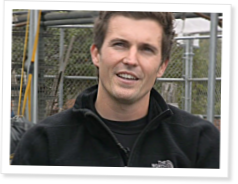 well here goes, I first came across crossfit in a article in mens magazine about gym jones. I liked what I saw on the website, especially the idea of being able to start my own business out of my garage, but unfortunately I didn't do anything about it. that was about 3 years ago. I recently moved to denton texas where I do hot shot delivery for a living. I've already put on about 15 pounds in 2 months and I wasnt little to begin with I knew I needed to do something. I decided to check out the crossfit website again where I started watching the behind the scenes videos from the 2011 games, I was immediately inspired, I subscribe to the journal and found a local affiliate whom I've visited the next day. I explained my situation and how I would need to have flexible scheduling for the foundations classes, they were very cool guys they said they would work with me in anyway they could. I am headed back from a delivery in boise idaho, when I was looking at the journal earlier I remembered seeing
crossfit radio, so I decided to check it out while driving home, I cannot tell you how excited I am to have ths, I sometimes driving 84 hours in
a 4 day period, you can only talk on the phone and listen to sports talk radio for so long, now I will actually have something educational and enjoyable listen to. I'm starting from the beginning I'm on episode 5, it will probably take me a couple of months to catch up to date but I can't wait. I am so pumped about crossfit, I plan on trying to hit 1 box per trip that I take, so hopefully after a while I will have crossfit friends around the country and I'll be bringing you guys along for the ride. I start my foundations class monday and I can't wait.
p s j j I hope your 2008 wrestling season went well. forgive me for the choppy text, this is speech to text I'm using a while driving.

sincerely your soon to be brother in crossfit, scott

Scott enjoyed reading your post! Admire your willingness to do whatever it takes. Welcome to the Crossfit Junkie world!

Scott,
Welcome to the fold, brother. Thanks for the comment and I hope the show keeps you awake and excited about CrossFit. Good luck on the foundations class. I am jealous that you get to visit so many different boxes. Let me know how that goes.
thanks,
JJ