CrossFit Training During Pregnancy and Motherhood: A New Scientific Frontier

Dr. Cooker Perkins and Hannah Dewalt explore training intensity during pregnancy and call on CrossFitters to help them take their research further.

Now, over 25 years later, with a surfeit of research studies to glean from, the recommendations for aerobic exercise during pregnancy have advanced quite a bit. To be brief, they essentially changed from “guidelines” to “recommendations” while they modified, expanded and clarified the details along the way.

Common questions a pregnant woman may ask herself include the following: But what about a training program that is higher-intensity or one that will improve strength and power during pregnancy? Will I harm my baby? Can women do it? Should women do it?

Truth be told, we don’t really know much yet. What we do know from the small group of studies that have been done is that “light resistance training” has been shown to positively affect some pregnancy and birth outcomes, and, perhaps more importantly, has not shown any negative effects.

The feats of the women who have continued CrossFit through their pregnancies are simply astonishing. There is no question: CrossFit moms are the pioneers of this new frontier.

Due to an email problem, Dr. Perkins asks that any women who previously contacted her please reconnect via this address: cperkins@pepperdine.edu.

Women who are interested in learning more about the study and participating are also encouraged to contact her at the same address. Initial eligibility: women who voluntarily participated in CrossFit training during their pregnancy (no intensity or frequency requirements) and kept a consistent log of their workouts. 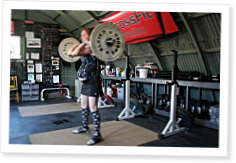 Lifting to Save a Pair

Josh MacDonald uses a host of methods to help children move better, and he’s finding CrossFit is a great tool for a pediatric occupational therapist.

Zionna Munoz has started a new program to support the fight against breast cancer. Robert Wilson explains how Amazing Grace—Barbells for Boobs got its start.

The CrossFit community is no… Continue Reading

For pregnant CrossFitters, resources on how to continue hitting the WOD are becoming easier to find. CrossFit Chantilly owner Catherine Cochran, a Type 1 diabetic, shares her… Continue Reading

9 Comments on “CrossFit Training During Pregnancy and Motherhood: A New Scientific Frontier”

This issue in my opinion is risk of a negative outcome regardless of cause. From a trainer/box owner’s perspective, I don't want that bulls eye on my back.
Because if something goes wrong, there has to be a reason and when the uneducated friends of the mother begin to chime in, “well it has to be that exercise program you did while you were pregnant.” Everyone told you not to do that, now see what happened.

The plaintiff attorneys and media will be on it like flies on a fresh turd. The emotional component of blame overrides all elements of common sense and the lawsuits flow like well, more turds, and guess who is on the receiving end?

As an exercise physiologist and trainer, I struggle with this all the time. I’ve trained many women through pregnancy at intensities similar to CF WODs. One was in labor during her last workout and didn’t even realize it, delivered that evening. All normal outcomes and labor and return to exercise was enhanced by continuing exercise through pregnancy. There have been a few miscarries, but all returned to exercise, became pregnant again and delivered normal, healthy babies.

I get very frustrated when my highly fit clients are told to do nothing but light cardio the moment they become pregnant. The primary reason is the OB is CTA (covering their ass) and I have to adhere to their recommendations or it’s my ass if something goes wrong, again regardless of cause.

My suggestion to CF trainers. Get a release from the participants OB, make sure they are clear on what the client is doing, understand the pregnancy/exercise interaction and physiology (ACSM and ACOG), contraindications, considerations, warning signs, etc. and be ready for anything. Make sure your insurance covers working with pregnant clients. Lastly, regardless of anything else, it the client has any reservations about continuing on, don’t encourage, let them do their own thing. Remember that emotional component, it overrides everything, be careful.

Kendra is phenomena. Mike is a great coach. Super pumped to see you guys and CFM in the journal.

"I don't want that bulls eye on my back".
Because if something goes wrong, there has to be a reason and when the uneducated friends of the mother begin to chime in, “well it has to be that YOUR OBGYN DIDN'T RESTRICT THE AMOUNT OF CARDIO you could do while you were pregnant.” Everyone told you not to do that, now see what happened.

The MED MALPRACTICE attorneys and media will be on it like flies on a fresh turd. The emotional component of blame overrides all elements of common sense and the lawsuits flow like well, more turds, and guess who is on the receiving end?

I imagine this is the same reason an OBGYN tells his/her patient to stick to light cardio.

It's a shame we live in such a litigious society where people refuse to take responsibility for their actions and always try to blame someone else for their irresponsibility.

I've been Crossfitting for 5 months. I've become quite the "crossfit missionary" sharing the gospel of Glassman with anyone who will listen. I'm happy to see Crossfit being introduced into every demographic. Unfoturnately, Mark's last paragraph is so so true and so so sad!

(capital letters do not represent yelling)

Great article and one that makes you think. Mark you are right on point with your comment and concerns. Every pregnancy is different so their will never be straight across recommendations. My wife is on her 5th month of pregnancy and simply can't do crossfit right now. Energy and joint laxity issues as a result. I have had a instructor's "group exercise teaching kickboxing" water break during class and she wanted to finish teaching! She didn't by the way. But what I think is very important is that we capture the data and outcomes when we get the chance.

I am a Crossfit Coach from crossfitLondonuk, I am also a qualified pre/post natal trainer. One thing I can say classroom learning on pregnancy doesn't prepare you for crossfit!!

I am 41 weeks pregnant with my first child and trained all the way up to 40 weeks. This was a perfect time to find out the effects of crossfit on pregnancy. I had been training crossfit for 2 years before the pregnancy.

This has been a journey for me as I had no idea how my body would react to training and pregnancy, my answer to this was to log and blog all my thoughts, WOD's and bump progress as I went.

This has been a great time for me as I have been able to surprise myself by how far I can push myself and what the pregnant body is capable of.

Although each case is individual I think my investigations how shown that pregnancy does not by any means mean you have to stop what you love doing.

My baby is still hanging on in my tummy and I have made a decision to relax training in the last week or so. I will however be right back after birth investigating post-natal training.

I'd like to thank all of the women who make the choice to challenge the accepted guidelines and to record their results. May fortune smile upon you and yours, and may the rest of us learn from your successes.

Our kids are teenagers now, but I still remember putting my heartrate monitor on my wife so that we knew when to take breaks while we were playing racquetball. She had no problems with joint laxity and in both cases was able to remain active right up until delivery, which came 2 weeks ahead of schedule each time.

Mark - I definitely see alot of your concerns while my wife was pregnant she kept CF'ing though we definitely scaled exercises and intensity. Any good coaching staff would know that, along with knowing how the hormone shift affects joints, tendons, etc. Our box had no issues with my wife, along with a few other wives, all training while pregnant though they/she/we all knew to substitute alot of the exercises. Knowledge is power!

Great article. Back in April when we found out our first baby was on the way, I was deep in the midst of CrossFit Sectionals, in the best shape of my life, and I'd also just made the transition to full-time coach at CrossFit Springfield. I wasn't prepared to stop CrossFitting; I was lucky enough to be the fourth in a line of amazing women in our box that decided to continue their programming straight through their pregnancies. I did a lot of reading and a lot of doctor pestering, and made the decision to do the same. I've had no complications and my son is as healthy as a horse. I've also been able to maintain quite a bit of my fitness level. Sure, there are restrictions (an 8-month pregnant belly doesn't allow for much in the way of Oly lifts, and having a bowling ball on your lungs will keep you from any sandbag sprint PRs), but I've consistently CrossFitted at least 4 days a week all the way through (regular CrossFit Springfield programming, not CF Mom).

Beyond that...I've watched the beautiful babies that are products of these CrossFit pregnancies, and never have I seen more engaged, alert, intelligent and healthy kids. Sure, they're not happy unless they've got their hands on a steel barbell, but who can blame them? Bottom line for me is this: if you're healthy, if you've been CrossFitting for a year or two, and if your pregnancy is normal, GO FOR IT. Pregnancy is a blessing, a unique experience, and the ultimate sacrifice next to death, but it's not a WOD killer. Listen to your body, listen to your baby, stop double-undering and box jumping, HAVE FUN, and look forward to the day you can tear it up again.

Like Sally - I am a CF box owner and decided to blog my workouts through my first pregnancy (www.amandafitpregnancy.tumblr.com). I was able to pretty much continue without much scaling, although I definitely took more water breaks and tried to keep the WODs to under a 1/2hr. I had a healthy happy baby on 12 October 2010 which pretty much silenced the critics.
Very interested in broader research on this topic though.