Intensity and movements are scalable. Jeff Barnett says you can apply the same concepts to nutrition.

Many athletes are not willing to endure a sudden change in nutrition. It’s easy for me to say they should because I know the results they can eventually realize.

However, anything a human has been doing for multiple decades is a tough habit to break. After all, I didn’t go straight from Krystal to strict Zone/Paleo. I made a gradual transition as my knowledge of CrossFit grew. While it’s not the best way to change for fastest results, this might actually be the most reasonable method to expect from the average athlete. After all, we teach that intensity is relative and you should gradually work up to full-intensity workouts. Making a sudden transition to a healthy diet can be just as daunting and difficult for some athletes.

Some folks are convinced by persuasion, but some remain unconvinced, or the attraction of the average American diet is so strong that they can’t quit the crack. In this article, I’ve outlined some individual steps that will help someone move toward a healthy, proportioned Zone/Paleo combination that would have Starr Jones washing clothes on her abs. 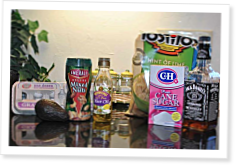 Nicole Carroll writes of her struggles with implementing the Zone Diet in, “Getting Off The Crack.” At first Nicole thought she was starving and wouldn’t survive. But she… Continue Reading

Very Nice article on healthy nutrition and the gradual process of changing from 'everyday' eating to Paleo/Zones.

Thanks for providing a simple, yet disciplined approach to bridging the gap from bad nutrition to elite nutrition. It's a practical approach that implements measured sacrifice to achieve massive goals. Classy reference to '80s music at the end. Nice.

really appreciate this article. There are a lot of different paths to take in our pursuit of a healthy lifestyle and I think it's really helpful to acknowledge and support the fact that we are not all going to get there the same way or on the same timeframe. As long as we are working on it, and focused on progress, it's all good!

Fantastic article! Entertaining and right to the point.
Very nice

Excellent article. As you suggested, beginning CrossFit without emphasis on the diet, will get you results...however, the diet is the 'throttle down'. We should emphasize diet with all new CrossFit athletes from the word GO! CrossFit + Paleo/Zone has improved my life 100-fold. Fresh look on the world and helping others!

I just wish that bottle of Jack was on the left side of the photo...

Spot on article, Jeff. I started the Zone diet about 6 months before discovering the Crossfit.com mainsite about 6 months ago. I was delighted to find the endorsement of the Zone by Crossfit.
I totally went through, and still occasionally go through with some new co-worker, the different levels of peer reaction to the dietary changes I made. Over the last 12 months, I'm down from 185# to 160# at 5 ft. 6 in tall, and just last month one of the visiting managers who "used to be a personal trainer" advised me that I shouldn't lose any more weight. This woman is known for working all day with no breaks for lunch or snacks...

Very helpful article Jeff to help all kinds of people make incremental but positive progress. One comment that I don't agree with so much is about "breaking the emotional connection to food". I totally understand where you're coming from but for me, I still love food and enjoy what I'm cooking and eating but it's just healthier. When I started zone, I did find it monotonous especially as I love cooking but this just pushed me to go out there and find new, exciting recipes. I now love trying out all kinds of exciting cuisines so I would encourage all the cooks/chefs out there not to be hesitant about trying out zone/paleo. It's a brave new cooking world out there!

Thanks for the kind words, all.

Sujata, thank you for the constructive feedback. I think we just may not see eye to eye on that topic. I think an emotional connection to food is inherently bad and usually limits progress. I see it many, many times in people who are new to zone/paleo. They go nuts trying to make paleo casseroles, pizza, pancakes, etc--all things they were accustomed to with the old lifestyle. I think with a new lifestyle like this you must realize that some things just don't fit. And if you spend a couple hours in the kitchen trying to simulate mashed potatoes with cauliflower, that tells me you still really want mashed potatoes. In my opinion, the victory comes when you start wanting asparagus, artichokes, broccoli, etc more than mashed potatoes. On the flip side, I do know a couple people who are very interested in paleo cooking, and it doesn't thwart their results. I just think it's something that will thwart results for the majority of people because it preserves the emotional connection to food. I'm glad you're finding results and still having fun cooking. If you can keep that up, that's all that matters!

Jeff, thanks for your response to my feedback. Yes, I definitely see what you mean by old emotional connections that most of us have to food and how that can seriously hamper or even reverse progress. Having emigrated to this country as an adult means that many of the tough choices people have to make about moving on from pizza, pancakes, soda etc didn't really feature heavily in my emotional connection to food which helped enormously. Potatoes on the other hand took time! And as you suggest, it's important to make that emotional switch to wanting the good stuff rather than just cooking it because it's paleo. And it's the cooking adventures part that I'm really enjoying in addition to the physical benefits I'm seeing. Thanks again for a great article!

Jeff, I appreciate the article. Good read and very informative. I also read your article "The Zone Diet Explained". I am going to follow your stepped process outlined here, but looking at the chart in the reference article (also in the CFJ seminar guide) breaking down the blocks for males, what the he'll is a "hard gainer". Maybe I am way off, but I have never been able to make an educated guess since I first read this term.

This is by far one of the most helpful articles I've come across as far as the actual transition to a healthier diet.

Would love to see an info source on Zone friendly vegetarian options.

Thanks, I printed out this article to refer to often and stay on track

Great article, thanks Jeff. I'm curious, why do you say keep in whole wheat pita bread? What makes this less harmful to health and performance than other kinds of bread?