An NFL Reporter at the CrossFit Games

Sports reporter Julie Buehler has been to Super Bowls and NBA All-Star Games, but she’s never seen anything like the 2011 Reebok CrossFit Games.

I’ve been covering sports for more than a decade.

I’ve witnessed the spectacle of the Super Bowl, seen the groupies converge for the NBA All-Star weekend, been in locker rooms, smelled the grass at baseball diamonds, and navigated countless tailgate parties. But I have never been to a sporting event where the spectators are as impressive as the performing athletes and the atmosphere makes you feel like you’re attending a family reunion.

Yet on the biggest stage for one of the most dynamic sports on the planet—the CrossFit Games—that was precisely what happened.

And I got some killer tan lines. 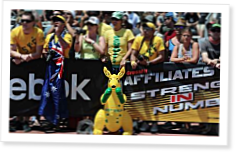 In this video shot after the most recent Games, the 2010 champion talks about what drove her to compete. With confidence in… Continue Reading

Graham Holmberg finished 19th in the 2009 CrossFit Games, and he’s pretty sure he didn’t train properly for the July showdown at The Ranch in Aromas. He worked plenty… Continue Reading

2 Comments on “An NFL Reporter at the CrossFit Games ”

Loved the artical Julie, please, please get this and more positive views out into the mainstream so that more people have the chance to enjoy the joy of repeatedley thrashing yourself and then going back the next day for more of the same that's totaly different.