Confessions of a Naval Pentathlete by Kasper Hansen - CrossFit Journal

Confessions of a Naval Pentathlete

Kasper Hansen, a member of the Danish armed forces, rekindles his love of training and sport through CrossFit.

I stumbled upon CrossFit in fall 2009. Two of my friends started working out in one of Denmark’s first CrossFit gyms, Butcher’s Lab in Copenhagen, and they took me there a couple of times when I was in town. I had long been in search of new inspiration for my training to keep me motivated. CrossFit proved to be that inspiration.

I had been training and competing in Denmark’s Naval Pentathlon since 2005 with good results. I was a two-time national champion and finished second in the Nordic championships in 2007 but still felt as if I had yet to fully realize my potential.

After taking a a CrossFit seminar and meeting Blair Morrison in early 2010, I finally found joy in training again. For the first time in a very long time I began really looking forward to the next workout.

I had a limited amount of time to travel and train in Copenhagen on the weekends, and when the first competition of the season arrived, I had barely been on the tracks at all. The obstacle-course race was my first since the summer of 2009, but I was only one second off of my personal best. I won the championship. And although I didn’t set any personal records, the results were so close to my previous bests that I was sure my CrossFit training had positively affected my performance. 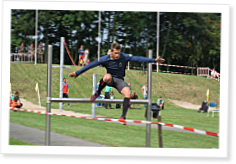 Most CrossFit athletes know the cramping, burning ache in the forearms caused by Fran, but few have pushed through that to fire a gun at a target.

At a Nov. 16 competition in Florida… Continue Reading

By Dave Re and Dave Castro

Join Dave Re, grand master in the United States Practical Shooting Association, as he works with Director of Training Dave Castro on the speed or emergency-type reload at… Continue Reading

Jami the Finja and I tried our hand at the Naval Course when we were in Denmark last year. Every CF Box NEEDS one of these.

High speed spinning and grenade tossing? All in. These athletes are legit.