The WOW (Workout of the Week) is from CrossFit South City:

5:25 Cody Looney owns CrossFit Advantage and came on the show to talk about running a successful affiliate. He explained what’s involved in moving into a bigger space and how he stays motivated as an affiliate owner. He talked about what he does to promote the culture he desires in his box and gave coaching tips on helping members who aren’t moving through the full range of motion. Looney described what he’s done to increase the number of athletes attending his box, and he explained what things he avoids as an affiliate owner.

34:10 Jon Gilson owns Again Faster Equipment and told the story of how he was a bank teller and became interested in fitness. He then started working out at an affiliate in Boston, and he described the changes it made in his life, including motivating him to quit smoking. Gilson talked about evolving into a CrossFit coach, Level 1 Seminar Staff member and business owner. Again Faster had humble beginnings but has grown over time, and Gilson explained how he started providing media stories and videos to CrossFit HQ. Finally, Gilson described a recent initiative he has started that’s designed to help wounded-warrior athletes compete in various sports. 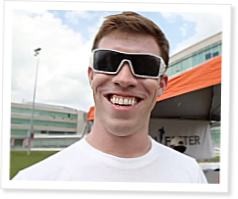 On Episode 315 of CrossFit Radio, host Justin Judkins interviewed Daniel Cook of CrossFit Black. This episode was webcast on Jan. 29, 2014.

I love these guys! Cody and Jon are both outstanding Coaches, Athletes and leaders in the CrossFit Community. Thank you both for all that you do! - Greg A.

CFA is the BEST! My one regret is that I didn't start sooner. Cody and the other coaches keep it fresh and fun every day. CFA itself is an "Awesomeness Multiplier"!

Awesome interview! I've been to many other CrossFit gyms, though they're all great, CFA is still by far the best gym I've been to. Cody really knows how to make every class enjoyable which is exactly what some of us need after a long day of work.

It sure would be nice if the sound quality could get fixed. In order to hear Jon Gilson (a great interview, BTW) I had to crank up the sound so much that Justin's voice made my ears ring. I already have enough problems hearing people, what with the barbells dropping and the loud music and all. Don't make me completely deaf, please! It's _often_ hard to hear the interviewees. You do such a great job getting interesting people on the show, I'd like to hear them.