In Search of a Programming God by Emily Beers - CrossFit Journal

Like thousands of other CrossFitters around the world, I have openly proclaimed my desire to qualify to the CrossFit Games as an individual in 2012. I’ve competed at the Home Depot Center twice with CrossFit Vancouver, but I haven’t let go of the individual dream.

At the elite level, it seems CrossFit has pretty much become a professional sport. It’s not uncommon for top athletes to hire multiple coaches—strength coaches, Olympic-lifting coaches, etc.

As for these CrossFit coaches, it seems every month there’s a new alleged programming expert who takes the stand on the soapbox, loudly shouting to the CrossFit masses about the best way to train. CrossFitters listen to these experts for a while, until a new one comes along with even more expertise, creating a fickle but continuous cycle.

In the process of figuring out how to train for the Games, I have met elite CrossFitters who train three times a day five or six days a week (I used to be one of them), athletes who cut out even the slightest sip of alcohol for months at a time, athletes who meticulously weigh and measure their food, and athletes who put their careers on hold for a chance to compete at the Games.

I’m torn. I don’t want to devote my entire life, dawn to dusk, to CrossFit. However, as an aspiring Games competitor, I wonder whether this devotion is a mandatory sacrifice. I often feel lazy that I’m resistant to this lifestyle in the first place.

In light of this, I decided to talk to some 2011 individual Games athletes to find out what exactly they’re doing to prepare for 2012. 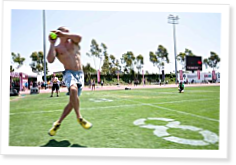 6 Comments on “In Search of a Programming God”

Absolutely fantastic article that I believe many Crossfitters should read, especially those who train primarily in their garage and look to the site for information.

Emily, this is a great article. thanks for taking the time to research and write it.
always a problem I have with athletes I train, and myself - what's the best path to their optimal fitness and hopeful dreams of competition podium placements. Turns out it's as individual as the sport itself.

Great write up. It was cool seeing those athletes take on things.

I am curious do any other games competitors take a week off at least after 2-3 months of training. It seems like Blair is the exception not the rule. I feel like a lose some progress when I take time off but do feel better recovered.m

Although I'm on a different peformance level, I resonate a lot with what Blair and Angie are saying. Performance has a longevity component for me, as opposed to the "this year, whatever it takes" mindset and I've come to realize that there is a limit to training frequency.

Having been privy to the training of Lucas Parker for a couple of years, I have to say that I respect this guy as much for his physical prowess as for his mental approach. Very few people take their physical gifts and truly seek to maximize them but Lucas is an exception and does so in a methodical fashion. I look forward to what he can produce this year and beyond.

I also look forward to seeing you (Emily) back in the mix again as an individual, get after it and let's see what you've got this year.

Great article! I love hearing about top people's training programs. That experimentation is what our evidence based fitness is all about. The more people's experiences we can hear about, and the more detail we can get about them, the better.

Thanks for the great article. The variety of training methods gives hope to those who may not have the "optimal" situation. Instead it shows that hard work and understanding of what works for each individual trumps all.