On Episode 206 of CrossFit Radio, host Justin Judkins interviewed Nicole Tanzillo, who is one of CrossFit Central’s success stories. This episode also featured a segment on Corey Auger by Emily Beers, and Justin interviewed one of the original Nasty Girls, Annie Sakamoto. This episode was webcast live at 6 p.m. PDT on Wednesday, Jan. 11, 2012.

The WOW (Workout of the Week) is from CrossFit Recoil.

1:55 Nicole Tanzillo, also known as “Paleo Betty,” is a self-described foodie at CrossFit Central. Her transition into a dedicated CrossFitter and Paleo pro was a difficult one because of her love for all the wrong kinds of food. She told the story of her transition and how she even gave up her cake-designing business because of her dedication to the Paleo lifestyle. She described her failed attempts at losing weight and keeping it off before trying CrossFit, as well as how her life has changed since starting CrossFit.

25:40 CrossFit Radio correspondent Emily Beers presented a segment with Corey Auger, who told his story of having a $100-a-day addiction to drugs. Auger explained how fitness, specifically CrossFit, has helped him to turn his life around, end the addictions and start living a healthy life.

36:45 Annie Sakamoto started CrossFitting with Coach Greg Glassman in Santa Cruz, Calif., in the early days of CrossFit. She explained what it was like to be trained by the founder of CrossFit and how the programming was so simple yet beautiful back then. Annie placed ninth at the 2011 Reebok Crossfit Games and described her competitive experience before talking about how she plans to stay sharp for the upcoming competition season. 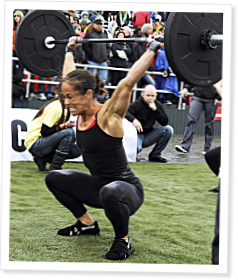 On Episode 177 of CrossFit Radio, host Justin Judkins interviewed longtime-vegetarian-turned-meat-eater Marriah Abellera, as well as Heather Bergeron, who is a member of CrossFit New… Continue Reading

This cannot be said enough: Annie Sakamoto is awesome.

Did anyone notice that the podcast on iTunes is cut off this week?

yeah it cut off for me...if you right click on the MP3 link above, chose "save link as" and it will download the file to your computer...i just uploaded that file into itunes and it worked.